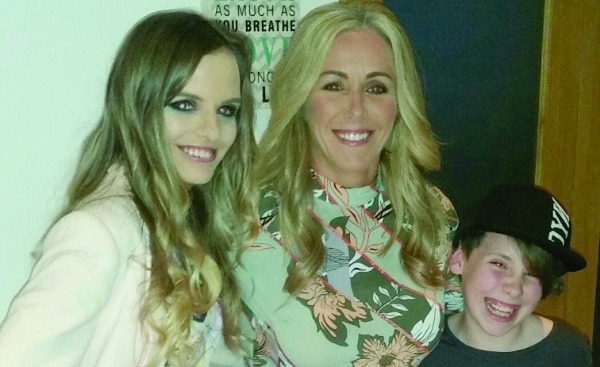 A TALLAGHT mother diagnosed with primary progressive multiple sclerosis is encouraging the community to actively support her in raising the final €20,000 she needs for life-changing treatment by taking part in a Triathlon challenge in Westpark Fitness.

Wendy Johnston (41), who lives in Old Bawn with her daughters Megan and Holly, was sent for an MRI two years ago after she experienced a number of symptoms, including a loss of power in her leg and arm and blurred vision in her left eye.

After tests the active mother was diagnosed with primary progressive multiple sclerosis (MS), a type of MS which patients do not get remission from.

Wendy, who is a special needs assistant, discovered a treatment called hematopoietic stem cell transplantation, which, costing €60,000, involves a person’s immune system being stripped back with high doses of chemotherapy and the replacement of their own stem cells.

Wendy stressed that, in cases of progressive MS, the treatment may not reverse any damage done before the procedure but that it can halt progression of the aggressive condition.

Wendy, who started a fundraising campaign called Wendy’s Hope to Halt MS, has raised €40,000 to date – with €20,000 left to go for her approved treatment in Mexico.

“I took a break from the fundraising for a few months but I’m back out trying to pull that last €20,000 together”, Wendy said.

“I can’t thank people enough for all of their support to date, everyone has been so supportive and so many amazing events have been organised over the past few months.

“Not only has people’s support helped me to raise money but also awareness around this treatment and the need for its approval here in Ireland.

“I’ve had a rough summer and have been in a lot of pain but I seem to be coming out of it.

“MS is very unpredictable but I believe that mind set is very important and I am trying to stay positive.”

She added: “There are currently MS clinical trials happening but it could be 2022 before the treatment is approved for MS patients which is too long to wait – I can’t take that chance.

“There have been amazing results for people who have received this treatment and I hope to start an awareness campaign seeking its approval once I get my treatment.”

When contacted by The Echo, MS Ireland said: “Multiple Sclerosis Ireland welcomes progress in stem cell treatment for people with MS, following success in the UK earlier this year with Autologous Haematopoietic Stem Cell Transplantation (AHSCT) – which for some people with MS, brings new hope in this area.

“An international clinical trial, is currently ongoing, with a centre in the UK participating.

“According to our colleagues in the MS Society UK, a number of clinical trials have shown AHSCT can reduce relapses and stabilise or improve disability… and points out that we need more studies to understand the long term effects of AHSCT.”

A number of fundraising events are in the pipeline for Wendy’ Hope to Halt MS including a fun, triathlon challenge in Westpark on Saturday, October 8.

People can enter as individuals or as a relay team for €30 and to sign-up simply drop into Westpark Fitness, where sponsor cards are also available.

Follow Wendy’s campaign on Wendy’s Hope to Halt MS or donate at gofundme.com/wendyshopetohaltms. Call Westpark Gym, which is located on the Greenhills Road, on 4626911.