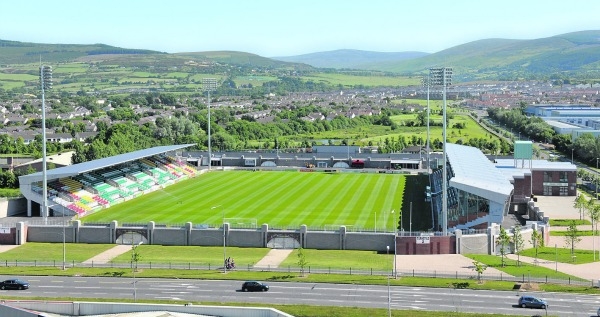 PLANS to develop a new stand at Tallaght Stadium are set to go ahead after further funds were allocated following the October meeting of South Dublin County Council.

€250,000 was given toward the development of a north stand at Tallaght Stadium as part of the re-allocation of funds within the 2015 budget.

These funds bring the overall fund to €750,000 for the stand, which is expected to accommodate up to 2,500 people bringing the total capacity to 8,500.

Daniel McLoughlin, chief executive of South Dublin County Council confirmed at the October meeting architects are looking at the building design of the stand “at the moment” and that a “sharp focus” on the stand will be given by the council in 2016, with construction of the stand taking place in 2017.

Temporary stands were previously installed at the stadium with a capacity of up to 10,900 for a friendly between Shamrock Rovers and Real Madrid, and with a capacity of 8,500 for the 2009 FAI Cup Final and for Rovers games in the UEFA Europa League group stages in 2011/12.

Shamrock Rovers will continue as the anchor tenants of the stadium, with the Republic of Ireland ladies team continuing to use it as their home ground, while other sporting events will continue to be hosted at the stadium, such as the Rugby League European Championship, Rugby Union and the Irish American Football League.

“We need to keep the pressure on so the stadium can reach its full potential,” remarked Cllr Charlie O’Connor.