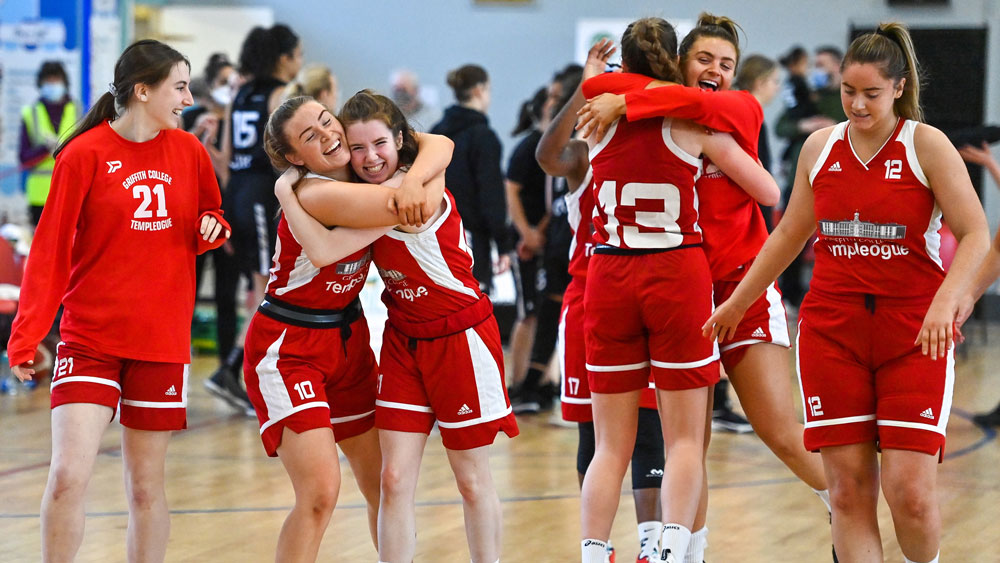 Templeogue make it through to final while Éanna come up short

There were mixed fortunes for Griffith College Templeogue and DBS Éanna at the InsureMyHouse.ie National Cup semi-finals in Cork earlier today.

Whereas Templeogue edged out Swords Thunder on a score-line of 63-58 to book their spot in the Women’s Division One National Cup decider, Éanna suffered a nine-point reversal (79-70) at the hands of Garvey’s Tralee Warriors at the penultimate stage of the Men’s National Cup – otherwise known as the Pat Duffy Cup.

Despite being three places and nine points ahead of their opponents in the Division One Northern Conference League table, Templeogue were pushed all the way before advancing into their forthcoming showpiece affair.

Swords skipper Peggy Black was one of her team’s best performers on the day and got the ball rolling early on with a superb three-point score.

Nevertheless, with Berta Carrea, Jah-Leah Ellis and Akeema Richards beginning to exert their influence, Templeogue brought a 38-35 cushion into the half-time interval.

Although Mark Byrne’s charges were in the driving seat, there was still some work to be done before a victory could be put beyond the reach of Swords Thunder.

Irish international Lynn Tunnah brought her personal tally to 17 points by the end of the third quarter and this moved Templeogue within touching distance of a coveted final place.

They did lose the aforementioned Ellis (who finished with 15 points to her name) to an ankle injury in the closing minutes, but Richards and Carrea came up with some big plays to ensure the south Dubliners emerged triumphant in the end.

At the nearby Neptune Stadium, Éanna were coming up against a Tralee side that included former Kerry footballer Kieran Donaghy amongst their ranks.

There was little to separate the teams during the opening 10 minutes of the action, but a three-pointer from Stefan Zecevic did give Éanna a 22-19 buffer moving into the second quarter.

Romonn Nelson and Alex Dolenko were on target when the play resumed as Darren McGovern’s men continued to take the game to their Munster counterparts.

Devin Gilmore also produced a superb slam dunk, which helped to propel Éanna towards a 43-40 lead at the interval.

Having qualified for the most recent final of this competition – a defeat to rivals Templeogue that took place in the early months of 2020, just before the beginning of the pandemic – they were eager to have another shot at the top prize.

However, Tralee came into their own during the third quarter and led 58-54 with just 10 minutes remaining on the clock.

A resilient Éanna did fight back to regain the lead through a Mark Reynolds effort, only for Nicola Roso and Fergal O’Sullivan to drive Warriors forward once again.

There was still only three points between the sides with 41 seconds left to play, but with Aaron Calixte and Daniel Jokubaitis to the fore, it was Tralee who ultimately progressed.