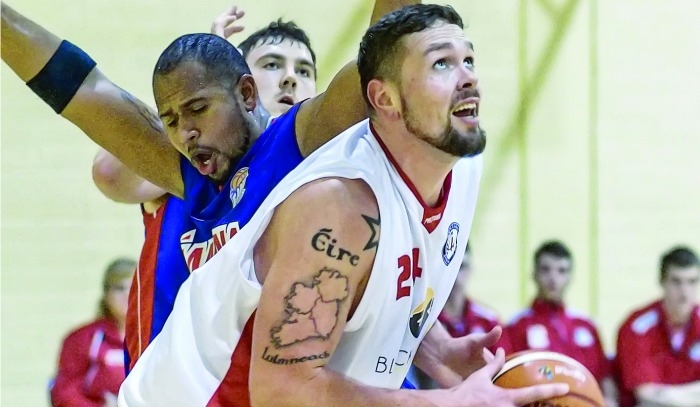 MEN’S SUPER League leaders, Templeogue produced a much improved second half performance to beat Belfast Star 57-81 in Methodist College on Saturday and extend their perfect start in the division to six wins.

The team, which was coming into this match off the back of three straight wins over UCC Demons in cup and league action, led 29-32 at the halftime break.

Yet they soon hit the gas in the second period with their three big offensive players, Jason Killeen, Lorcan Murphy and Mike Bonaparte, again in top gear.

The former emerged the game’s top scorer on 25 points while Murphy and Bonaparte each hit 18.

And while they were delivering the goods at one end of the court, Stephen James was helping contain the big hitters for Star in Dillon Stith and Keelan Cairns.

Looking back on the match, Templeogue coach Mark Keenan told The Echo “We had a very poor first half and were just three points up.

“We were just too complacent. We lacked urgency and intensity. I suppose it’s hard to keep it going when you’re coming off the back of three big games against Demons.

“But in the second half we got it going. I think we went on a 23 to 5 point run. We were very happy that we conceded only 57 points so we were good on the defensive side.

“Stephen James did a great job on their American Dillon Stith. He had hit 33 and 36 points in his previous two games and we managed to limit him to 16,” he added.

The victory leaves Templeogue three points clear at the top of the Super League table, but Keenan is conscious that there is a long way still to go.

“It has been a great start for us, but we are mindful that we have been in this position before.

“I think we were 10 and 0 last season and then we lost four of our last six games, so we have a long way to go,” he pointed out.

Next up for his side is a tie against a KUBS team that has yet to card a win in the league, but Keenan still expects a strong challenge from them this evening (Thursday) in the National Basketball Arena.

Indeed while they did eventually lose by 16 to second place Griffith Swords Thunder in their last match, KUBS did lead by seven at the break, proving they are well capable of causing an upset somewhere along the way.