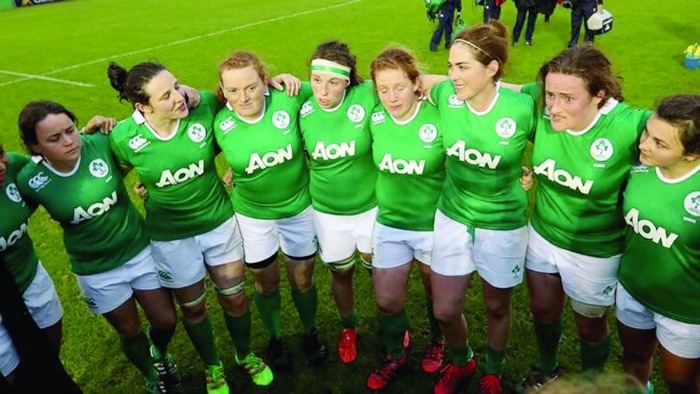 PAULA Fitzpatrick believes there are many positives on which the Ireland women’s rugby team can build after they were narrowly beaten 12-10 by world champions England in UCD last weekend.

The St Mary’s College Number Eight from Tallaght captained the team in this November inter-national series match for the very first time and was proud of her side’s display.

Indeed after trailing 5-3 at the break following Rochelle Clark’s try for the visitors, Ireland hit back in the second period.

Nora Stapleton, who had kicked a first half penalty, broke over the line on 50 minutes before tagging on the extras for the hosts who were missing the likes of Niamh Briggs and second rower Sophie Spence for this match.

But England eventually worked their way back on to level terms when Izzy Noel-Smith applied the finishing touch to an effective driving maul before Katy Mclean clinched the victory for her side with the subsequent conversion.

“It is mixed emotions to be honest” Fitzpatrick told The Echo. “It was a great performance by theplayers with three new caps coming in.

“But we’re gutted that we let them in to score yet again in the championship minutes. It happened to us last November and in the Six Nations and that’s something we’re going to have to look at.

“We also let a few opportunities slip when we got into their 22, so we have to be more clinical.

“But we said at the start that this series is not about results, it’s more about performance.

“There was a great buzz around the game and a great sense of togetherness with the team. Our phase play was really good and accurate”

“It was a huge honour to captain the side and lead the girls out on the pitch.

“It was great to have their backing [management] and the backing of the players” she added.

Now looking ahead to the rest of the challenges this month, Fitzpatrick added “We’ve got Canada at the weekend and then New Zealand after that. Two of the top teams in the world and we’ll want to build on this performance.

“We’ll be looking at our decision making and how we execute that. We’ll be looking to blood new players and really mimic the World Cup with games back to back so that when we come to that pressure environment and have to make changes, we can do it.”

The team has been drawn against France, Australia and the winners of the round robin tournament involving Fiji, Japan and Hong Kong in Pool C for next year’s Women’s Rugby World Cup and Fitzpatrick is under no illusions about the task that lies ahead.

“No draw is going to be easy at this level” she stressed.

“France we know well but we wouldn’t know too much about the other sides.

“France have a very strong pack and are very forward orientated so that will be a tough game” she insisted.