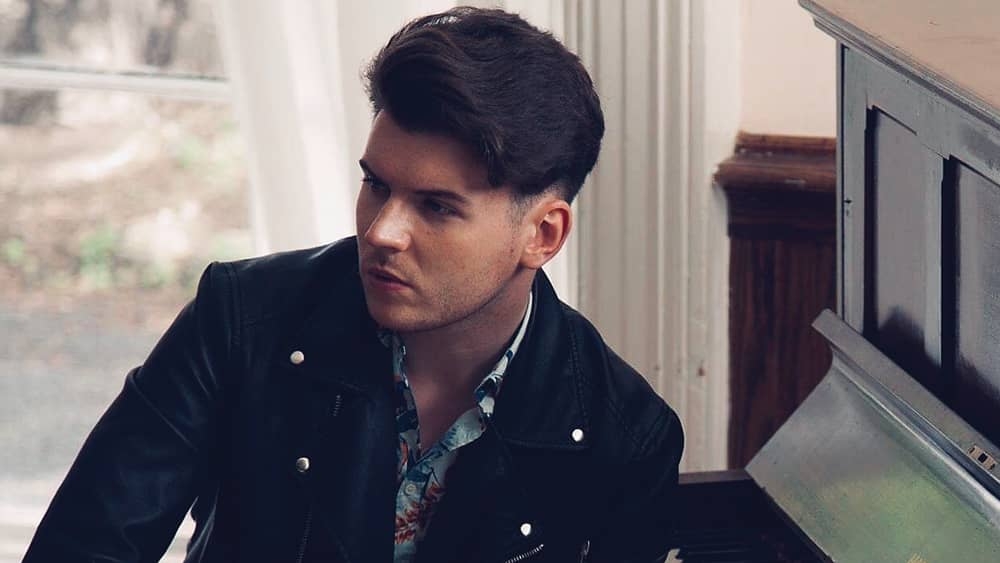 Playing online shows for audiences in America and Ireland has become a mainstay of Clondalkin musician Colm Gavin’s output during the pandemic.

The 28-year-old singer-songwriter and guitarist, who is a past pupil of Moyle Park College, has been seeing success with his well-received livestreamed performances on Facebook under the title of ‘Songs from Beyond the Bordeaux Casks’ and for various venue owners, DJs and TV hosts in the States.

Colm has a varied range of influences, including the folk stylings of Joni Mitchell and the indie leanings of Neutral Milk Hotel, and he’s currently working on new material with former Eurovision winner Charlie McGettigan and independently as a solo artist.

Ahead of the release of his new EP, ‘The 1992 Tapes’, next month, Colm told his local paper about his international online performances, the impact that his late music teacher Peter Stanton had on him, and what fans can expect from his new EP.

How did your regular online performances for audiences in America and Ireland, which you’ve been doing since the pandemic began, come about?

There are a number of DJs, venue owners and TV hosts who’ve been kind enough to invite me to give virtual concerts on their various platforms.

The Jeff Pulver Show in New York has had me on their programme a handful of times in the last few months. A lot of your readers will probably know Jeff from his 92Y talks with Deepak Chopra or his many TED Talks.

The Cellar Door is a wine cellar/music venue in Mount Dora, Florida, run by two enchanting souls: Devon Pearse and Cary Polkovitz, they’ve been kind enough to give me some virtual stage time too.

In a previous interview, you said that you don’t have any natural talents when it comes to musicianship, and that the abilities you have now are as a result of practice and perseverance. Can you elaborate on that?

I stand by that statement. I was blessed with an incomparable music teacher, Peter Stanton, whom I studied with for 15 years. He would always emphasise the importance of constructive practice and a comprehensive knowledge of musical theory.

Peter was at the helm of the Clondalkin School of Music since the mid ’90s and unfortunately passed away last month after a long battle with cancer.

He made an indelible mark in my life and I’ll never forget him. I think, for younger people especially, there’s too much of an emphasis put on ‘talent’, but it counts for nothing.

I hear 20-somethings today saying, ‘If I was going to be successful it would’ve happened by now’. That sort of lacklustre, ‘think first, dance later’ attitude won’t yield any fruit. You’re either in this for the long-haul or you aren’t. If you’re in this game solely for the love of the craft, you’ll always find yourself in the right place at the right time.

Charlie McGettigan has been collaborating with you recently, how did this collaboration come about?

Charlie McGettigan is an alpha/omega character for me – he’s the real thing. He sent me a message last April and very candidly asked if I’d be interested in writing some songs.

Who could pass that up? Charlie writes in his 70s with the creative consistency of a 25-year-old songwriter at the height of their powers. He’s a gentle soul, eternally instructive, and incredibly giving with his time and wisdom.

Often my mother will receive an elated phone call from a family friend or relative saying “I just heard Charlie talking about Colm on RTÉ radio” – a statement which gives great validation to what I do, for those who are curious to know if I’m ‘still at the music’.

You’ll be releasing your new EP, ‘The 1992 Tapes’, next month. Can you tell me a bit about it, and why you chose the name?

In 2018 I set about writing an album called ‘1992’. I made a number of attempts at recording songs for the record, but they never quite reached the soundscape I had in my mind.

I’d come away from a recording session feeling like demos surpassed the real thing. I love the John Lennon approach to releasing music the week after its recording session, so I haven’t fully finished recording this EP but I’ve set a release deadline of late May.

Brian O’Dwyer is producing the record, which I’m delighted about, because he’s just such a joy to work with. It’s a collection of songs that, in terms of radio play, go entirely against the grain.

However, the present single, ‘Your Little Corner of the Moon’, is five-and-a-half minutes in length and has already reached the indie charts in Japan and Australia, so here’s hoping the European market is as curious!

Where can people go to find out more about you?

Colm Gavin Music on Facebook or @colmgavin Instagram are usually the easiest places to find me, but for all of the non-social media folks, Spotify, iTunes, Amazon Music and all good streaming platforms tend to carry my wares.