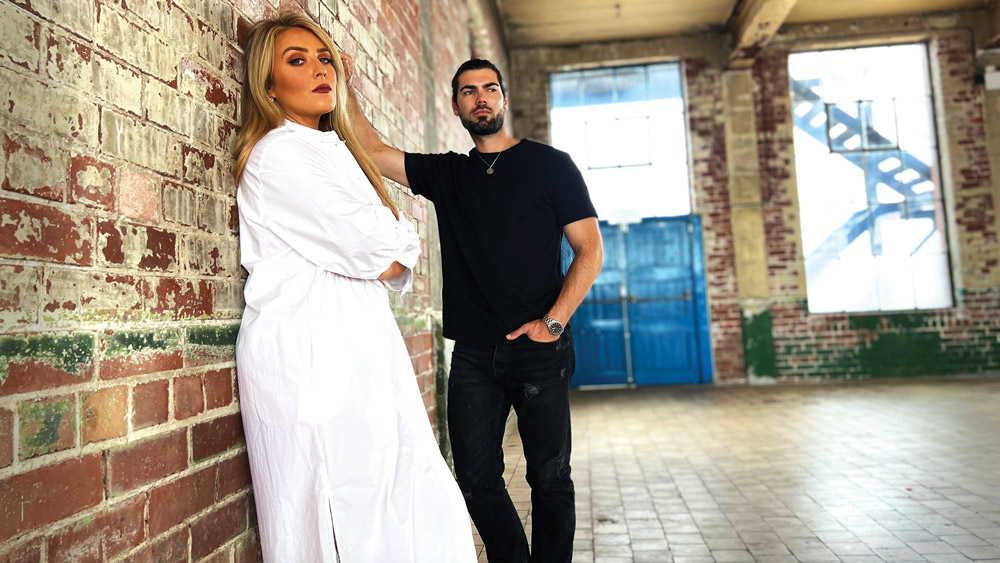 T he looming industrial backdrop of Belfast city serves as an arresting vista in the music video for indie duo The Brave Collide’s new single ‘The First Time’.

Composed of Knocklyon native and former Celtic Woman singer Chloë Agnew and singer-songwriter and musician Brian McGrane, The Brave Collide has been making waves with their emotive music.

‘The First Time’ details the joy of finding your soulmate. It was written after Chloë and Brian attended a friend’s wedding and were inspired by the love they saw.

Chloë, who splits her time between Dublin and Los Angeles, told The Echo about her work on The Brave Collide, her exciting future plans for the band, and her experiences in Celtic Woman.

How was the Brave Collide formed?

Myself and Brian first collaborated back in 2017 and at first we were just recording covers for fun, but we really enjoyed making music together and people responded really positively to what we were doing, so it inspired us to start working on some original music together.

We released our first single ‘Somebody Just Like You’ this time last year and it’s been a really rewarding first year for us.

The idea for The Brave Collide was two worlds colliding and being brave enough to do something new together, so seeing positive things coming from it in our first year has put a fire in us to keep doing what we’re doing.

You’re a seasoned performer, having toured internationally with Celtic Woman. Does working in The Brave Collide feel like a gear-shift compared to your work in Celtic Woman?

It’s a different world musically, yes, but a lot of the same graft and hustle still applies – if not more, to be honest.

As The Brave Collide, we are independent artists and we do practically everything ourselves, so it’s quite different in that you don’t have the same support network and team of people that you would have working with the likes of a large-scale touring show like Celtic Woman.

However, that makes everything so much more rewarding because you have a different creative freedom and control and it’s so liberating to find the different doors it opens for you.

What’s the biggest learning curve you had as a performer when you were in Celtic Woman?

Most people look at the music and entertainment industry and think it’s a very glamorous job, and the majority of the time it’s far from that.

I was lucky growing up in an environment that taught me the highs and the lows first-hand, so I never saw the business through rose-tinted glasses, which I think is a trap a lot of young aspiring singers and musicians can fall into.

Touring with Celtic Woman taught me what it takes to be able to tour for months on end, away from your loved ones and family, performing six shows a week in six different cities.

It takes a certain kind of tenacity and strength that I’m glad I learnt at such a young age. In an ever-changing landscape, it has stood to me the older I get, venturing out into the industry on my own.

The Brave Collide’s new single, ‘The First Time’, is an emotive folk ballad that centres on finding your soulmate. What was it like for you and Brian to create that song?

It’s one of the songs I think we’re most proud of, and it holds a very special place in both our hearts.

We took inspiration from friends of ours who got married, and seeing their love allowed us to tell the story of anyone who knows that feeling of when you find your soulmate.

Anytime we write or create something together, we pull from our own personal experiences, and this song poured out of us with such a specific storyline to write to.

The video for ‘The First Time’ was filmed in an empty trade centre in Belfast, with large windows showing the industrial appearance of the city as a backdrop. What appealed to you about having this as the location for the video?

We kind of found the location by accident – but a beautiful one at that. Myself and Brian decided we wanted the music video to be conceptually simple but effective, as we didn’t want anything to distract from the story and sentiment of what we’d written, so when we discovered the Portview Trade Centre, immediately, we knew we’d found exactly what we were looking for.

The light flooding through the windows in that big open space with Belfast city as our backdrop gave an industrial/urban yet classic look to the video.

We also got to work with one of Belfast’s best videographers Danny Mills, who filmed one of our other music videos, so we love working with him and we knew he could bring our vision to life.

What plans are in the pipeline for The Brave Collide?

We are currently getting prepped for our first Irish tour in late November with some of Ireland’s finest talents, along with writing and finishing our debut album, which we’re hoping to release next year.

We’re also excited to be planning a US tour for Spring of 2023 and lots of new music and videos over the coming months.

You can keep up to date with all that we’re getting up to over on thebravecollide, and you can find us on all social media platforms @TheBraveCollide.