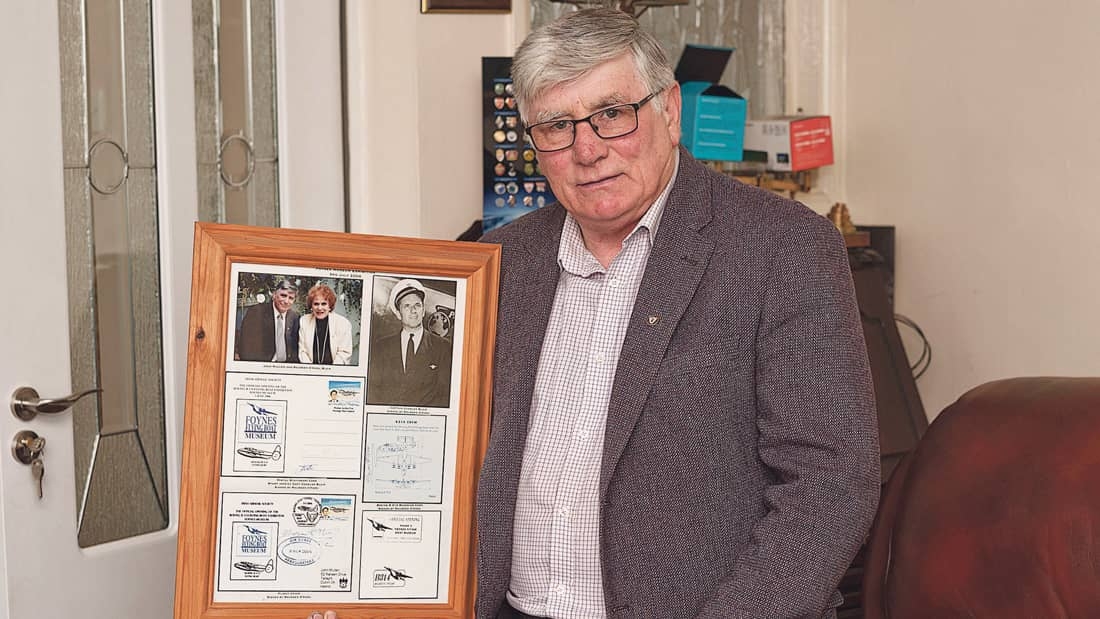 The Collectors: A resplendent Irish historical museum of stamps, postcards, letters and envelopes

THE front room of Jackie Mullen’s Tallaght home is essentially an Irish historical museum, resplendent via the medium of stamps, postcards, letters and envelopes.

It is a powerful collection, and some of the biggest moments of Irish history are present, including letters by the big names connected to the Northern Ireland Peace Process, correspondence by Daniel O’Connell (signed by the family coat of arms), famine letters, the first issue stamp in the country (Penny Black 1840) and ‘82 Club’ tickets, a club founded by Young Irelander Thomas Davis in 1845.

Jackie first developed his love for this craft as a five-year-old kid in the Dominican boys and girls club in Tallaght Village.

“On Sunday after Mass, we would go into the Dominican hall and one of the brothers would come over and empty out a bag of missionary stamps,” said Jackie.

“That was my first introduction into stamp collecting. One of the categories I found exotic is India.”

This early fascination heralded the beginning of a lifelong collection which includes six folders dedicated solely to Indian stamps from 1740 – 1948, and his haul shows no sign of ending.

Jackie is a respected specialist in the form of a philatelist (a stamp specialist) and postal historian.

He has created postmarks for An Post, and is a member of a number of specialist groups, including the Dublin Stamp Society, Irish Philatelic Society, Irish Airmail Society, the Éire Philatelic Association of America and the German Irish study group of German stamps.

His work with the societies often takes him across the country and abroad, speaking at events like South Dublin County Council’s 2016 Centenary celebrations.

Looking through the collection in his living room, Jackie’s enthusiasm is reminiscent of a young lad who has just recently discovered a missing Panini sticker to complete the set of a fabled football team.

“Stamp collecting is huge worldwide. I have a massive collection.

Conflict with the police under sub-inspector Burke at Tallaght, near Dublin.

Due to Covid-19, exhibitions such as the Irish National Stamp Expo in Griffith College were cancelled, but it has not stopped the hunt for new material.

“They come up in auctions I know about, I’m on a listing,” said Jackie.

A postcard to Tallaght in 1912

“I’ve become so particular in what I collect. The good stuff doesn’t come up often but when it does, I know about it.”

Giddily pointing out a ‘pièce de resistance’, Jackie presents a letter from Daniel O’Connell – whom he has devoted another category in his collection to.

Another letter by Daniel O’Connell, sent from London to Fermanagh in 1829 shows two free hand stamps O’Connell was entitled to as an MP.

“He is one of my heroes but I have quite a few.”

The introduction of the Penny Black and Red allowed more people like merchants and traders to send letters, as prior to this, letters were the preserve of the ruling class and military personnel.

Another collector item is the 1841 Tallaght Maltese Cross cancellation stamp on a Mulready cover – a pre-paid envelope designed by Irish artist William Mulready that was the forerunner to the Penny Black.

“That is the only Maltese Cross cancellation known in Tallaght. There was plenty Maltese Crosses around the country but Tallaght was never known to have one – this proves it wrong.

A Famine letter from 1848 is another eye catcher, from a Sam Harding of Newton Tallaght, telling his agent that it is “not in my power to give you any money until the crop came round and then please God I will clear all.

“Tallaght wasn’t know for the Famine because it is close to Dublin. I got it from a dealer because it was Tallaght. He asked if I wanted it, I said of course I want it.”

The craft of stamp collecting has lost a bit of its allure in modern times due to mass production.

“First day issues are extremely rare and sought after before 1960. I don’t collect first day issues anymore (post 1960), they produce too many, there would be no point,” said Jackie.

Over the years, his travels have led to meetings with some famous faces including former James Bond actor Pierce Brosnan, Maureen O’Hara and famous poet Seamus Heaney, who borrowed Jackie’s phone to make a call on the boat to England.