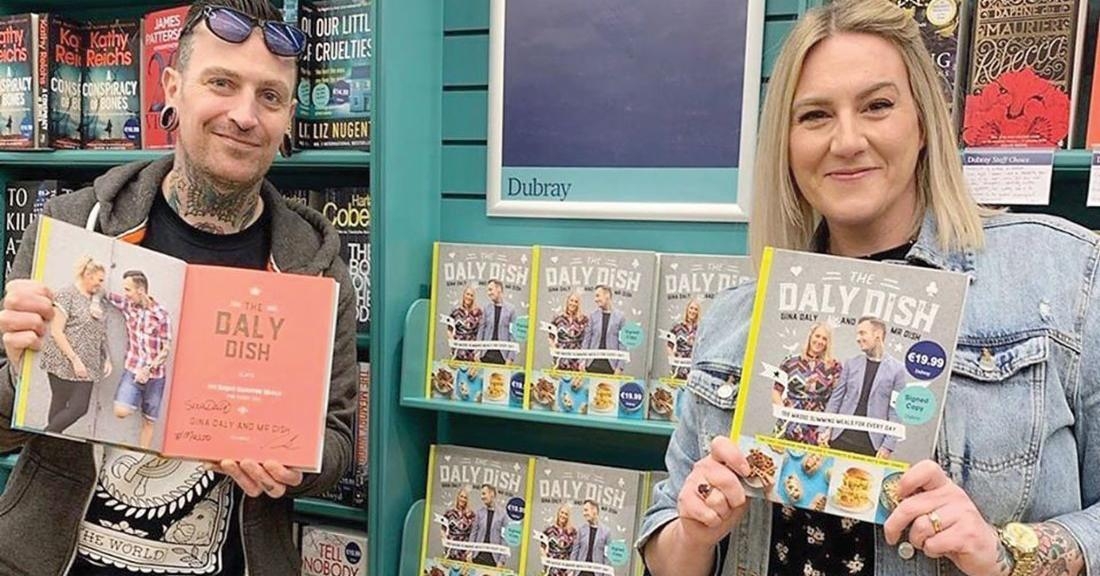 The Daly Dish Cookbook: Bestseller book has been a big hit for Gina

Since many of us have a lot of downtime during this pandemic, it is the perfect time to try out some new recipes or learn to cook for those of us who may be a bit culinary challenged.

What better way to do that than from a local in the community?

Gina and Karol Daly showing off their new cookbook

Gina Daly, Instagram food influencer and new author from Lucan, has been creating and sharing new recipes with her husband, Karol Daly, since August 2018.

Gina began her venture with food after having a gallstone operation that caused her to lose some weight.

The weight loss helped Gina feel happier and healthier, which inspired her to cook bold, healthy new recipes and share them on her social media; @thedalydish.

The couple’s social media has been a massive hit, focusing on creating alternative, healthy recipes for what some would call ‘dirty food’ such as fried chicken and burgers.

Gina Daly, then and now photos showing her weight-loss progress

Together, the Dailys’ have lost almost 140 pounds since beginning their venture and are one of Ireland’s most popular weight-loss couples.

The whole family gets in on the action as well with Gina and Karol’s children, Holly age 10 and Ben age 8, often being featured on their Instagram, which their audience eats right up.

Gina’s children mean the world to her and their inclusion in healthy eating motivates her work.

In the beginning of her now twelve year marriage to Karol, Gina suffered an ectopic pregnancy and almost lost her life. She was told she might never have children but, happily, within six months was pregnant with their daughter, Holly.

Now, this culinary family is on to their next journey with their new book, The Daly Dish Cookbook.

Their cookbook was released on March 10, 2020 and has been a massive hit, earning it a spot as number one bestseller.

When the book was announced in February it quickly amassed more than 5,000 pre-orders, creating unprecedented demand on Eason’s website and breaking all pre-order records for Irish bookshops.

Deirdre said: “I was a huge fan of The Daly Dish’s slimming recipes from the start and can testify to their indulgent deliciousness! I just knew a cookbook from them would be a hit and it has been a joy to see the excitement build among fans about the book release.

I can’t wait to see more people eating and enjoying these fabulous recipes and sharing them online.”

The couple also run The Bitch Box, an online greeting card company that shares their unique sense of humor and flair for design, with Gina as the illustrator.

Their wild, bold humor is also reflected in The Daly Dish and their cookbook.

So, as the social distancing picks up alongside your boredom, make sure to check out Gina and Karol’s The Daly Dish Instagram page.