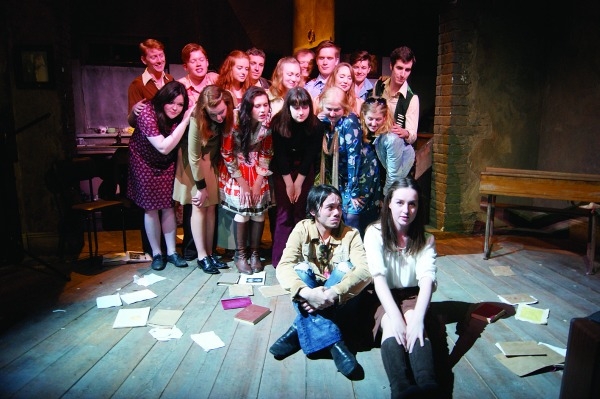 LIVING in Ballyroan until he was eight, director and producer Andrew Flynn has come along way since he remembers his dad heading out to work in The Blue Haven.

Andrew is well known to Irish audiences for bringing award-winning, high-quality and diverse plays to theatres right across the country with Decadent Theatre Company – which also brings theatre out of city centres and into communities, making theatre accessible to the masses.

After living in Ballyroan in Rathfarnham until the age of eight, Andrew moved with his family to Tipperary where his dad ran a pub – and a young Andrew got a life-lesson in character building from the many people who passed through the door.

Now living in Galway, Andrew has adapted and directed Irish writer Patrick McCabe’s The Dead School – which Decadent is bringing to the stage of the Civic Theatre this February 29 for a six-night run.

Despite a busy schedule, Andrew took a few minutes to chat with The Echo.

Was theatre something you always wanted to do? How did it all start for you?

I guess I was interested in theatre, since primary school, but at first I was interested in acting …. I realised fairly quickly that I wasn’t very good. When I was in secondary school my English teacher was passionate about theatre and that really helped. I think I actually started directing as there was no one else to do it with out youth theatre. But once o did I loved it… I was hooked…

Are you still a full-time director and producer with Decadent? How important are theatre companies in terms of supporting Irish actors, playwrights and directors? And, promoting great locally-based theatres like the Civic?

Yes I am still working with Decadent. I simply love working in theatre and couldn’t do anything else. The arts and theatre has had a rough time over the last 10 years. The arts budget in Ireland has always been small but the recession decimated it. A lot of companies suffered and this meant less work for actors. The venues , including the civic have helped independent companies by supporting touring work …. I think the arts sector pulled together to keep the arts alive, but budgets need to be improved for the arts.

Is it is a tough game to be involved in or are more opportunities presenting themselves?

It is , no doubt about that, but I suppose most people who work in this sector, aren’t really thinking about being wealthy, they do it because they love it… Most people simply try to make a living… However I feel being happy in what you do is more rewarding than cash.

Your latest production is McCabe’s The Dead School, why was it chosen?

It is simply a brilliant play. Pat’s novels are always packed with humour, sadness, tension and fantastic characters. They make wonderful dramas. The Dead school has all of the above and is a play and story that will both move and entertain and audience.

It’s characters are people who audiences will identify with. One of the most interesting things is that the play is set in 70’s Ireland, a country at a cross roads, and that clash of cultures , the traditional versus the modern is fascinating. Going to see the play is a little like reeling in the years mixed with really brilliant characters and stories.

A lot of McCabe’s work transcends time, do you believe that The Dead School, written over 20 years ago, has a message for today?

It definitely does. It’s a human story and charts the rise and fall of two men from different generations. I guess the dramatic of relationships failing, losing a parent prematurely, and peoples descent into madness will always be relevant.

Do you remember the first play you saw?

It was a musical production of Oliver at the concert hallo. I was 4 years old and I loved it.

If you could work with any actor, dead or alive, who would it be and why?

I love actors, they are really special people, it sounds cliched but I have loved working with every actor I have ever worked with and couldn’t single out one.

If there any book or story you have read of late that you could see on the stage?

Oh yes, I have been immersed in the fiction of Kevin Barry and Donal Ryan, I think they are both brilliant and there work would be amazing on stage… Here’s hoping!

Next is a touring production of one of my favourite plays… The Weir by Conor McPherson , I can’t wait…it’s a fantastic play.

The Dead School will run in the Civic Theatre from February 29 to March 5 and tickets cost €20 and €18 with concession. Visit www.civictheatre.ie or cdall the box office on 4627477 for more.