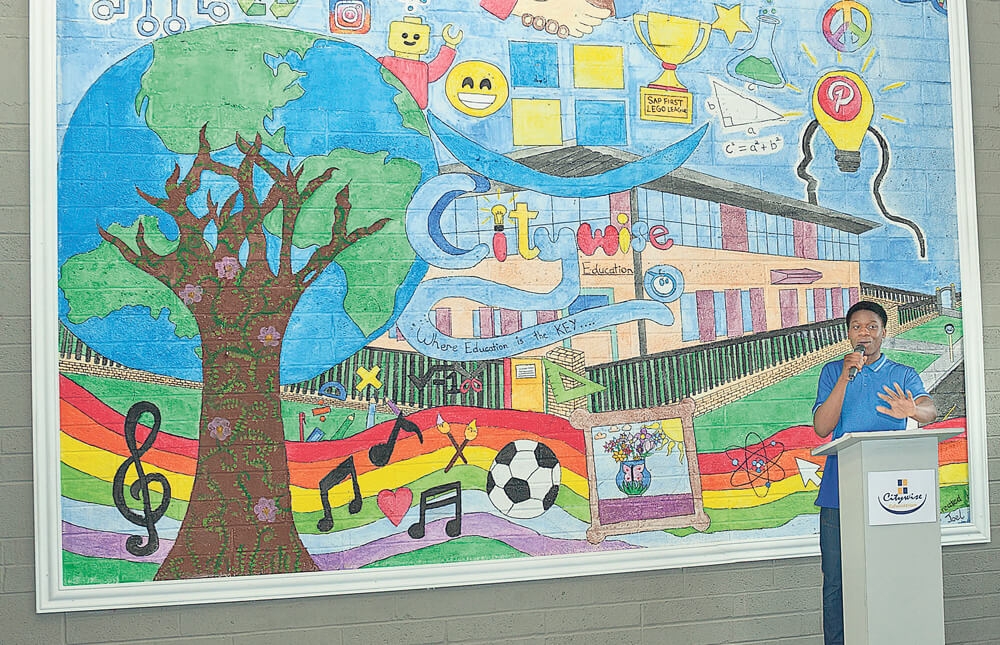 The magic of a mural

A TALLAGHT 17-year-old last week unveiled his mural in Citywise, which creatively captures the significance of the education centre, its young people and the wider community.

Living in Brookfield, Joel Osaghae spent the past year working on the impressive painting for his Silver Gaisce Award.

A student of Holy Family Community School in Rathcoole, Joel has been attending Citywise in Jobstown for three years, where he has done supervised study and extra classes.

Over that time he has also assisted with summer camps, became a leader, delivered an art club to younger members and completed his Bronze Gaisce Award.

Speaking on the day, Joel said: “So, for my Silver [Gaisce] Award I wanted to incorporate my love of art and Citywise into one project so, after a year of thought and hard work and a few tears here and there, I present to you my painting.

“Completing this painting is just the next stage in my journey through Citywise. It was a big decision for me to undertake such a huge task, but I’d say an even bigger decision for Jonathon [CEO of Citywise] to let me do it.”

Joel also talked those present through the different elements of his supersized painting.

“So, in the far corner you might notice that I’ve painted a tree,” Joel said.

“Now the tree represents our roots in Jobstown, but over the years, as we’ve grown as a community, the members have branched out beyond Dublin and eventually all over the world.

“I think that’s an amazing accomplishment.

Sophia and Katelyn provide music for the occasion of the unveiling

“The two hands represent equality because we offer programmes and activities to everyone regardless of their ethnic background, race, age, colour and so on.

He added: “You probably notice the bus stop in the corner – it represents the future of each individual at Citywise.

“Some may plan to move onto third-level education and others may plan to get a job, but nevertheless Citywise assists you on your journey.

“This is the bus to a brighter future for the youths.”

Joel also explained how the recycle logo represents Citywise’s efforts to re-use, reduce and recycle, with the frame around his painting made from old skirting boards.

The smiley face represents how the people and atmosphere at Citywise can put you in a good mood, while the stars are there to show that each individual who comes into the centre is a “star and has their own way of shining”.

Congratulating Joe, Jonathon Doyle, CEO of Citywise, told The Echo that he was “amazed” by the painting.

“It’s huge and is a main focal point when people come into the centre,” Jonathon said.

“It’s such a strong expression of belonging and pride in the area – and it’s not just about Citywise or Joel, but the whole community.

“For a 17-year-old to also capture [through the inclusion of the bus stop] that you come to Citywise and leave with a plan is amazing.

“Young people leave here with a plan, it could be a job, an apprenticeship, college . . . you go onto the next stage of your life.”

The mural has pride of place in Citywise’s games room/youth café area.

For further information on Citywise and its range of education and afterschool programmes, visit Citywise website HERE.