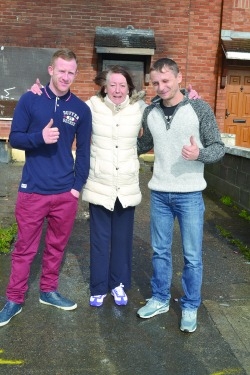 ‘They risked their lives to save our mother’

QUICK thinking neighbours saved the life of a grandmother – moments before a blaze engulfed her home.

The dramatic scene unfolded at Clifden Drive in Ballyfermot last Thursday night (March 5).
Angela Murphy (65), the sole occupant of the house, went upstairs at approximately 10.30pm, leaving the television in the sitting room on standby.
Unbeknownst to her, smoke started to smoulder from the tv utility outlet after midnight.
Luckily, eagle eyed neighbour Chris Fahey (38) noticed the fire and immediately ran over to the house, furiously knocking on the front door.
Other neighbours heard the commotion and soon gathered outside – some thought Angela was not home, as she often stayed with family members nearby.
Undeterred, Chris continued to bang on the door to no avail, whilst another neighbour Niall Maher (28) arrived on the scene, and promptly kicked in the door.
The pair entered the home, picked Angela up at the top of the stairs and got her to safety moments before the living room windows exploded.

For the full story see page 22 of this week’s Echo.