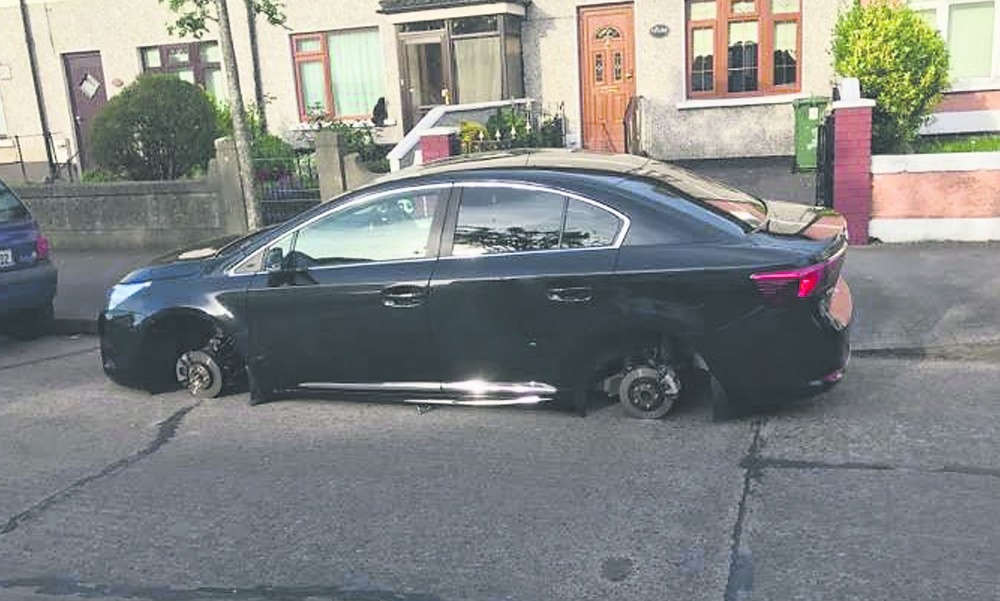 The theft of car wheels seems to be back in vogue – with more vehicles targeted on the same road in Crumlin recently.

In what appears to be a ‘stolen-to-order’ incident, two Toyota Avensis cars had their wheels stolen outside the owners’ homes on Bangor Road at approximately 11pm.

The Echo understands one of the residents didn’t notice two wheels were missing on the passenger side of his car, and attempted to drive off on Wednesday morning only to come to an abrupt halt.

A neighbour told The Echo they believe that the theft of wheels is a “big thing at the moment”.

In recent weeks, The Echo has reported car wheels being stolen from vehicles in Tallaght, Rathfarnham and Terenure.

In one of the thefts at Belfry estate in Citywest over the Easter Bank Holiday weekend – thieves smashed a window on the vehicle, recovered the lock-nut from the boot of the car and proceeded to remove all four wheels, using a car-jack and the spare wheel to hoist up the car.

Both vehicles targeted in Rathfarnham and Citywest that weekend were Volkswagen Golfs, and it is believed they may have been robbed to order by an organised gang.

A Garda spokesperson said they were investigating the theft of car wheels in the Crumlin area and appealed for anyone with information to contact Crumlin Garda Station at 666 6200.