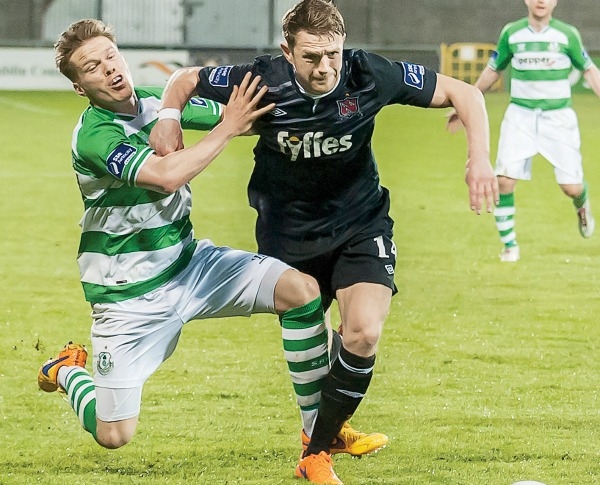 “Three points at Derry will be massive”- Madden

SHAMROCK Rovers defender Simon Madden believes a win over Derry City on Friday night at the Brandywell will be a huge boost to their Airtricity League campaign.

Both teams have made impressive starts in the Premier Division this season with Derry sitting joint top alongside defending champions Dundalk after taking 13 points from their opening six games.

Rovers are just a point behind and have a match in hand over the two teams above and will be hoping to leapfrog the Candystripes tomorrow.

“A lot of teams are going to drop points there [at the Brandywell] this season, so if we can get three points there it’ll be massive” said Madden.

“I think Derry’s overall work rate is very good and they showed that in getting the point against Dundalk.
“The have the likes of Rory Patterson whose scored four goals, so it’s going to be tough.

“It’s a tough place to go, travelling all day and then you have the home supporters on your back so it would be great to get the win” he said.

Rovers will be coming into this match on the back of their 2-0 victory at home to Galway United last Friday.

Tallaght’s Brandon Miele opened the scoring for the Hoops after just eight minutes, but it was not until two minutes from time that they made the game safe through Trevor Clarke.

It was just the result the Tallaght side was looking for ahead of their trip up north after having suffered two disappointing defeats on the bounce against St Patrick’s Athletic in the league and non-league side Collinstown in the Leinster Senior Cup.

“It was important that we bounced back from the loss to Pat’s and we did that against Galway” said Madden.

“We had a good first half but didn’t play so well in the second. It was another clean sheet and it shows that we’ll be hard to beat this season” he asserted.