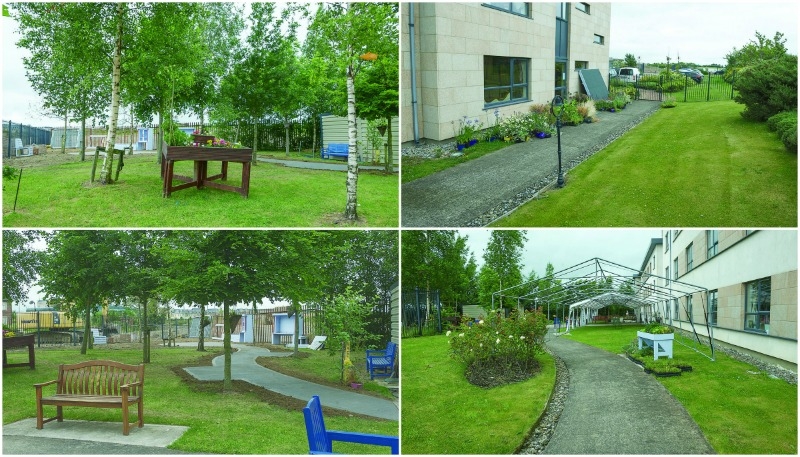 TLC garden in Citywest enhances wellbeing of people with dementia

A therapeutic garden that enhances the wellbeing and independence of people living with dementia is being recreated at the TLC nursing home in Citywest following its appearance at the recent Bloom festival.

The Dementia Garden was sponsored by the TLC nursing home group, with research into what elements should be included in the therapeutic space carried out by TrinityHaus at TCD – with this research transformed into a garden by landscaping specialists Newtown Saunders Ltd.

The garden, which was dismantled after Bloom, is now being recreated at TLC in Citywest, and is expected to be finished and open to residents and their families by July 2.

Elaine Keane, director of clinical services for the TLC group, told The Echo: “We are committed to finding ways for engaging people living with dementia.

“Things have really moved on for people living with dementia in recent years.

“In the past people living with dementia became frustrated because their environments didn’t appeal to them or reflect their interests or needs.

“We need to stop emphasising a person’s limitations and emphasise their abilities, and this is what the dementia garden is all about.”

She added: “We recognise the therapeutic effect of outdoor space and activity as well as the endless possibilities that a well-designed and accessible outdoor space can provide for those affected by dementia.

“Our experience has been that when outdoor spaces are welcoming and accessible, such as this garden is, people with dementia and their carers have positive interactions, facilitating people to maintain their independence and engage in meaningful occupation as well as enhancing their health and wellbeing.”

According to Ms Keane, there are clear sightlines of the garden from inside, which will remind those living with dementia that there is a place to visit, encouraging them to go outside.

Traditional and familiar plants and features have also been used to reflect a person’s life and to help residents to reminisce on times gone by while plants with strong scents, such as jasmine and camomile, have be used to compliment the sensory aspect of the space.

There is sheltered and open seating areas where people can spend time with others or alone, a level, non-slip and single colour surface, simple layout for easy navigation and furniture that supports activities – such as raised planters for those using wheelchairs.

There is also a glazed tool shed so that objects are visible and easily located.

“This garden is a really positive thing from our point for view”, Ms Keane said.

“The staff across the TLC group who saw the garden at Bloom are now hoping to get their own dementia gardens and we hope that other nursing homes across the country will also be inspired and we can start a movement.”

For further information on TLC, which has centres in Santry, Maynooth and Citywest, visit www.tlc.ie