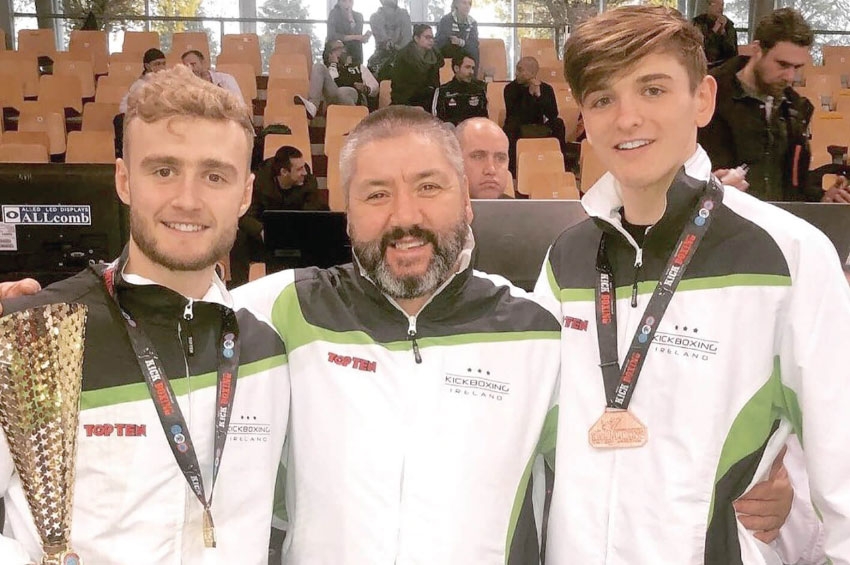 TALLAGHT Martial Arts may have had small representation on the Kickboxing Ireland team at the WAKO European Championships in Maribor Slovenia but they returned home with big rewards.

Competing under the guidance of their club instructor Dave Heffernan who is Kickboxing Ireland National Points Fighting coach, Gar Ryan, was crowned champion in the -74kg Points Fighting while Conor McGlinchey fought his way to bronze in the -79kg equivalent.

Both Tallaght lads received byes into their respective quarter finals, with Ryan firstly lining out against Martin Hauser of Czech Republic.

Having opened up a healthy lead, he came out in the start of the third round and caught his opponent with a head kick to stop the contest on the maximum score rule (10 clear points).

His semi final against Gregorio Amboldi of Italy proved a closely fought contest from start to finish, but in the closing round Ryan produced some precision counter punching to win 17-14.

It set up a title showdown with Hungary’s Richard Veres- a multiple WAKO World and European champion.

Included on the nighttime Gala show which was televised live in Slovenia, the decider saw Ryan open up four-point lead in the first round.

His timing and counter punching were starting to frustrate the Hungarian in the second, but the Tallaght competitor still had to weather a third-round fightback by his opponent.

Ryan maintained his focus and stuck to his game plan to win out by a single point and be crowned the new WAKO European champion.

McGlinchey, fighting in his first senior WAKO Championship following on from his Junior WAKO World title win in Italy in September was pitched against Konstantinos Adams from Greece.

He took control off the contest from the outset with his superior kicking skills and was comfortably ahead at the end of the first round, eventually winning out 14-4.

In the semi-finals, he faced off against Riccardo Albanese from Italy with both fighters turning in somewhat tentative performances in the first round of this contest.

And while McGlinchey recovered some lost ground in the third, he could not stop his opponent from taking off again and securing the win.

Both Ryan and McGlinchey were also in action again in the team event on Saturday, helping Ireland beat Switzerland in the quarter finals 25-10 before they lost out to the eventual winners Italy in the last four.

Team Ireland was placed in seventh position in the medal table, winning three gold medals and seven bronze at this year’s championships.