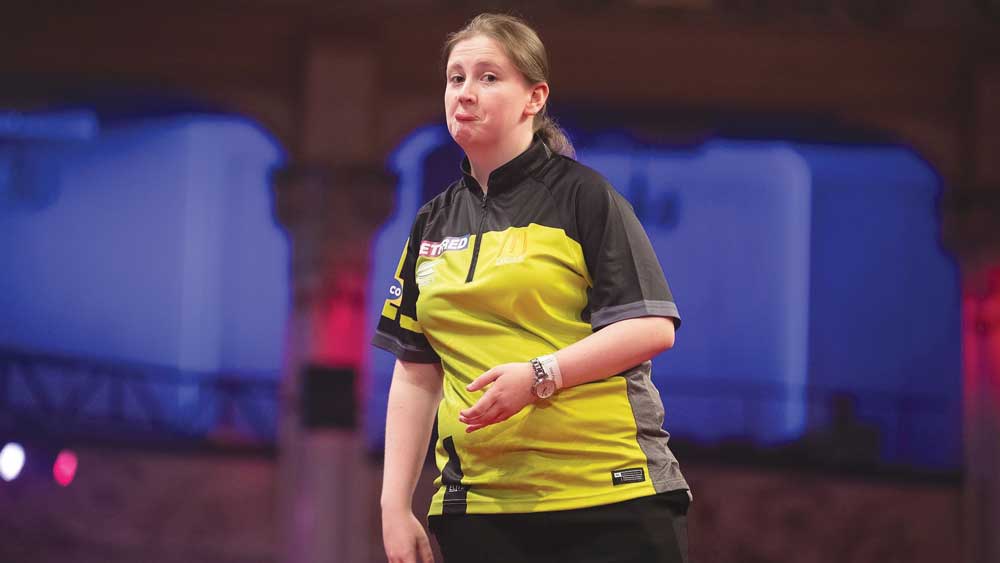 Katie Sheldon from Tallaght in action at the World Matchplay

KATIE Sheldon has spoken of her pride at mingling among the top stars of women’s darts after she lined out at the World Matchplay Championships at the Winter Gardens in Blackpool.

While she was beaten 4-2 by the eventual title winner, Fallon Sherrock, 10 years her senior, in the quarter finals, the 18-year-old Tallaght competitor gave a very good account of herself in her first time competing at this level.

“The match ended 4-2 and if I’m completely honest, the way I played wasn’t how I can play” Sheldon told The Echo.

“But to get up there on a stage that I hadn’t been on before and to give her a bit of a match, I was happy enough with that.

“Going out there it was a massive experience and to have some of the lads coming over with me, it was a great boost to my confidence, knowing they were in the crowd.

“So to have that experience at such a young age, I really feel that will stand to me.

“To get there at 18-years old, it’s a dream come true and I’m absolutely chuffed with myself.

“She [Fallon] kicked on straight after and I was delighted for her.

“But there’s always next year. Now that I’ve got a feel for it, I’ve gone and I’ve enjoyed it, I’ll go back to the board and hopefully get back there again” she said.

Next up for the Tallaght woman will be two trips to Germany in August, the first for the PDC Development Tour before a second visit a week later for a Women’s Series event that will mark the start of qualification for next year’s World Matchplay.