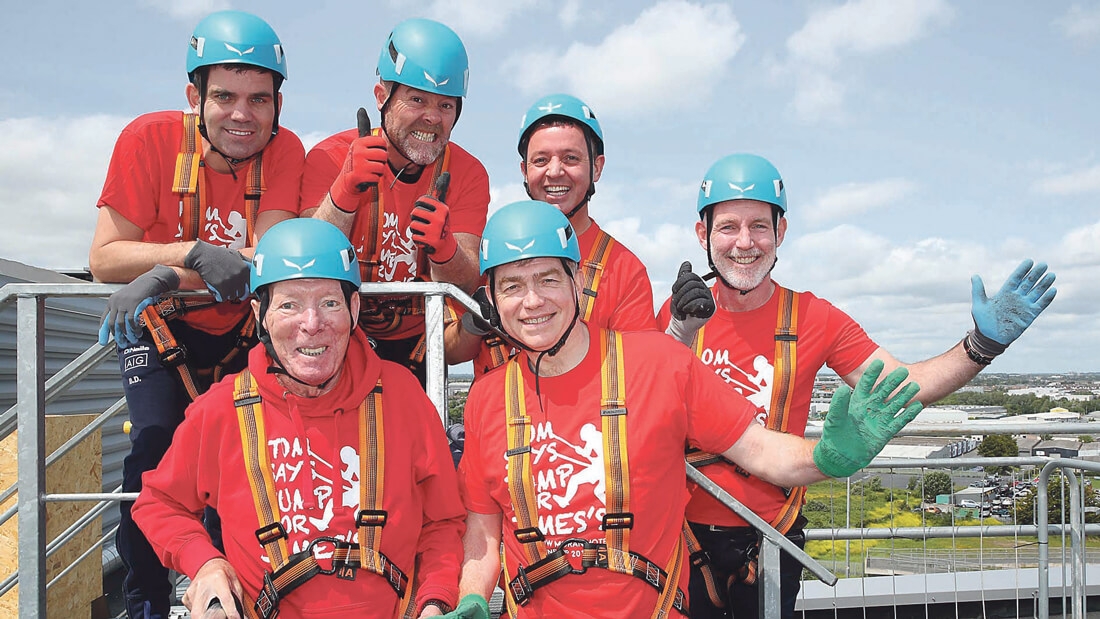 To mark the third anniversary of his near-fatal brain injury and remarkable recovery, CEO Tom Moran abseiled off the new nine-storey extension at the Red Cow Moran Hotel on Sunday to help raise €200,000 towards building a dedicated Brain Disease Resource and Research Centre at St James’s Hospital under the direction of Neurology Consultant, Dr Colin Doherty.

Attracting the largest number of abseilers in one day, Tom, his family and Dr Colin Doherty were joined by 130 thrill-seekers, including celebrities, country singer and Dancing with the Stars finalist, Cliona Hagan; Fair City actor, Dave O’Sullivan; broadcaster Ray D’Arcy; comedian, Eric Lalor and former professional boxer, Bernard Dunne from Clondalkin, to descend the iconic hotel – the highest abseil from a building in Ireland, standing at 35 metres.

In June 2016, a stroke caused Tom to fall while on holiday in Spain which caused a significant injury to his head.

He underwent a craniotomy and spent six weeks in an induced coma in Spain, before being airlifted to St James’s Hospital in Dublin under the care of neurologist, Dr Colin Doherty.

From the outset, the outlook was very bleak and Tom was not expected to survive.

His family were told that if he survived, there was every possibility that he would require care for the rest of his life.

The damage caused to his head was likely to result in him being brain-damaged, blind and paralysed. Three years on, Tom has defied all odds and has made an incredible recovery.

Feeling a huge sense of achievement, Tom said: “I was nervous and excited about this challenge but I am so glad I did it.

“It has been a fantastic day. It would not have been possible without all the help and support of my family and friends over the last three years, as well as the incredible care and attention given by Dr Doherty and the neurology team at St James’s Hospital.

“I was determined to give back to the hospital that helped me and to help others. I am overwhelmed by all the generosity and support from everyone to make this happen.”

All funds raised for the ‘Jump4James’ Abseil Challenge will go to St James’s Hospital Foundation – towards providing a new Brain Disease Resource and Research Centre at the hospital that will offer a new model for patient care in neurological disease.

The centre will be a purpose-built modular unit located on an existing site at St James’s Hospital. Through a process of re-design and renovation of new facilities, with new electronic-based work procedures, it will greatly improve the care environment.

According to Dr Colin Doherty: “It was great to abseil alongside Tom. The funds raised from this amazing challenge will help us reach our final target of €350,000.

“Our aim is to provide the best value care to patients in the most appropriate setting, in a timely manner, using the best information, diagnosis and therapy with the best-trained staff in the country.

“We already have a funding pot of €80,000 raised through a number of marathon races over the last few years and the hospital has committed to supporting this great initiative with funding. We are so grateful for the Moran family’s generosity.”