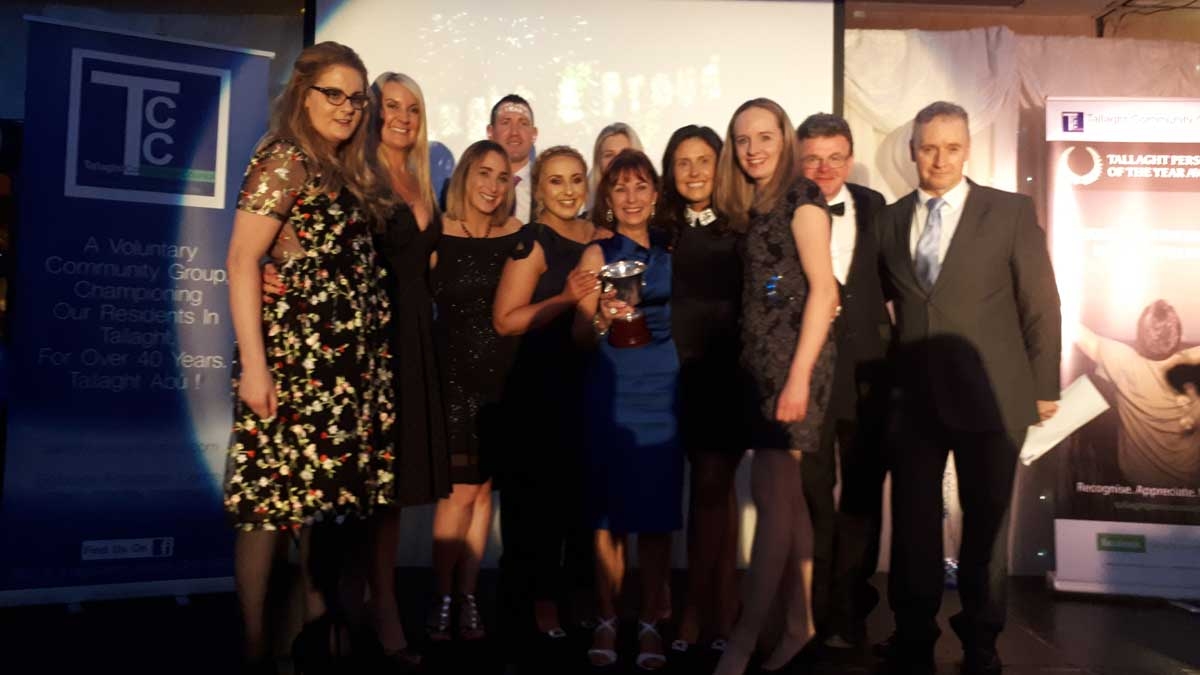 TPOTY2017: Congratulations to all of this year’s winners…

THE best of Tallaght was showcased last night, when people across all ages, backgrounds and estates came together to celebrate their hometown – and each other.

Like all communities, Tallaght has had and continues to have its struggles.

However, the resilience of the people who live here and their DIY-approach to building their community into a better place for all has helped grow Tallaght into a vibrant, diverse and caring community – that thrives on an inherent sense of volunteerism and activism.

This year’s Tallaght Person of the Year was once again a snap shot of life in Tallaght and the individuals, groups and businesses that work together to make it a great place to live, work and play.

All communities, all ages and all aspects of life were represented at the awards ceremony, with everybody celebrating together, on and off the dance floor.

Organised by Tallaght Community Council (TCC), the awards ceremony is now in its 34th year and was held in the Red Cow Moran Hotel.

Standing ovation for Sinead Tighe who has been named Tallaght Person of the Year 2017! Sinead has dedicated her new chains of office to her son Dan @Danielsvoyage28 pic.twitter.com/e9b7pm1Ox3

Tallaght Person of the Year 2017

Sinead Tighe was crowned Tallaght Person of the Year 2017 for being a “tenacious and devoted mam, who is striving to overcome many physical challenges to give her son Daniel a fulfilled life.”

O’Regan Pharmacy Old Bawn – staff at O’Regan’s were acknowledged for their many free advice and testing services throughout the year and their advocacy for local charities.

Laura Byrne Tymon – Laura picked up the community award for being an active member of Scoileanna Aonghusa Parent’s Association, volunteering weekly in the library and organising activities such as the swimming lessons.

Lisa McAuley Old Bawn – An avid Littermug, lovingly known as the ‘Swan Lady’. Lisa mothers all of the wildlife in Sean Walsh Park and has kept the world enthralled with her videos of the circle of life in the park.

Paddy Finlay (aka Paddy Drac) Bawnville – For over four decades of community giving as the most famous vampire in Ireland.

Codie Preston Jobstown – Codie picked up the award for years of mentoring, teaching and inspiring kids to be the best version of themselves through education and fulfilling their potential – inspiring peers and others to give back.

Jack Woolley DeSelby – Jack is an international martial artist who became World Champion in Taekwando (54kg) in 2017. He was also recognised for volunteering his times to the Community Games after completing a traineeship with Foroige, an “excellent role model”.

A big congratulations to Shauna Tighe wins special recognition in the Heart of Gold category. Congratulations to all the amazing young people nominated! #TPOTY17 @Danielsvoyage28 pic.twitter.com/Cb5Njo2UdD

-A Special Merit award and standing ovation was received by the Tree of Hope team for their ‘community-led response to acknowledging those who are gone too soon’ in our communities.

-Robbie Kavanagh from Kiltipper Cafe Bar won a Special Merit Award for his contribution to the community.

-3D Assist in IT Tallaght also received a Special Merit award.  The innovative 3D Assist team, which is made up of volunteer graduates, lecturers and students, prints 3D prosthetic arms for children – who are given the new, customised limb for free.