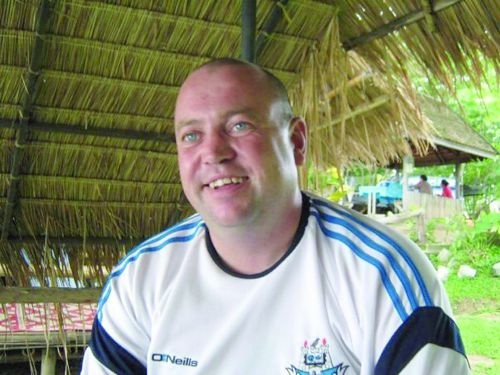 TRIBUTES flowed in to honour the memory of two former Firhouse residents, who sadly passed away whilst abroad. Kieran O’Brien and Sean McShea passed away in Cambodia and Spain respectively.

Kieran ‘Greener’ O’Brien (46), a former St Annes GAA member, was killed in a hit and run in the Kandal province last Saturday.

He was driving at about 80kph on his motorcycle, but was clipped from behind by a car, which sent him skidding about 30 metres along the road and into a dirt hole filled with water, according to local reports.

Kieran is believed to have died at the scene and police are looking for the driver who hit him.
His ex-wife Ros Srey Noch (26) was “shocked” to hear the news and said:”he loved his daughter and I wish my daughter had not lost her father.”

Tributes poured in from St Annes GAA members. A statement on the club notes led with a message: “With great sadness we say goodbye to a dear friend and larger-than-life character Kieran (Greener) O’Brien, who tragically passed away following an traffic accident in Cambodia.

All at St Anne’s GAA Club would like to express our sincere condolences to the O’Brien family at this time. May he rest in peace.”

Multiple messages were left on St Annes Facebook page citing O’Brien as a “great bloke”, “ a character who will be missed by many” and someone with an “unorthodox sense of humour” who has generated “great memories” for his friends.

Sean McShea (34), a former boxer, was killed when the car he was driving crashed at the entrance to the port in Estepona, on the south coast of Spain, at around 5am on Sunday.

The Firhouse native was credited as a hero for saving several people who were sleeping in a burning building this year at Duquesa Port.

His wife, Lia Mullins McShea, said: “I lost my husband, my best friend, my soulmate and the best father to our babies.

“We were friends since we were five years old, we were together 10 eventful years, life was never boring with Sean.”