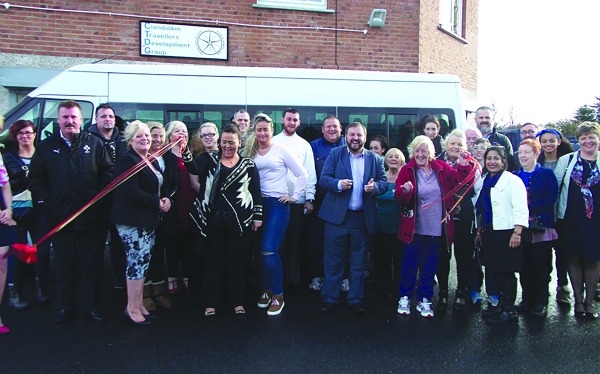 The project ethos has always been deeply rooted in community development, guided by the community.
Doreen Carpenter, Project Coordinator, said: “I was delighted to be part of the celebrations, especially given the immense pressure Traveller projects have been under due to funding cuts.

“It is a testimony to the commitment and hard work of staff, that has played a huge role in making events like today happen. In the 1990s, the group started as a result of Traveller women coming together to engage in a personal development group. From this, the group began to lobby and promote the needs of travellers.”

Following on from this, CTDG was established with support from a number of different agencies and volunteers.
CTDG works from community development principles. Staff is made up of Travellers and non-Travellers working in partnership – delivering a diverse range of supports in health, accommodation and youth services.

The new mini-bus was secured from National Lottery funding, and will be available for wider community use, as a pathway towards cross-community contact, celebration and shared resources.

Guests attended from the Department of Social Protection, Gardaí, South Dublin County Council, and a range of local community workers and agencies.

NEWER POSTCheck out all the biggest stories from last week’s Echo
OLDER POSTA great way to spread the Christmas spirit!