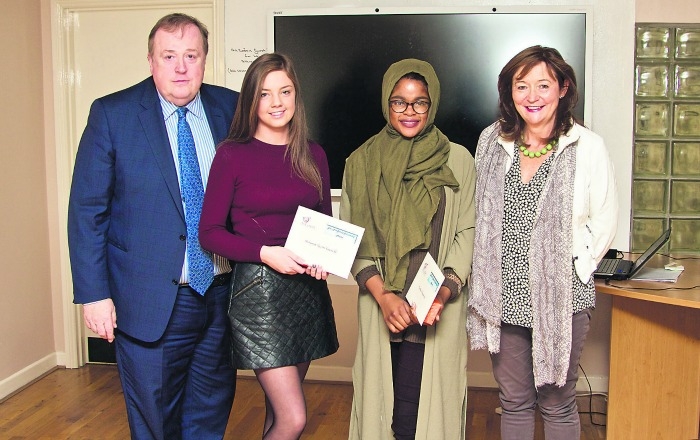 TALLAGHT students from schools in Brookfield and Jobstown were recently awarded educational scholarships through a community-based initiative which strives to break down barriers, creating equal access opportunities to college.

Students Timmi Adesanya from St Aidan’s Community School and Shauna Ryan Farrell from Mount Seskin Community College both received €1,000 from the Joan FitzGerald Scholarship, which is run by An Cosán education centre in Jobstown.

The students, who will embark on studies in law and pharmaceutical science, celebrated their win at the annual Joan FitzGerald scholarship award night in An Cosán, alongside Mark and Derval FitzGerald, family members, staff from St Aidan’s and Mount Seskin and the CEO of An Cosán, Maura McMahon.

On the evening Ms McMahon shared a video of past scholarship awardees who spoke about how the €1,000 award has been instrumental in helping them enter third level education and overcome the many obstacles to college – that still exist across communities.

Established in 2004 in memory of Joan FitzGerald, who was a strong advocate for equal access to education and lifelong learning, the scholarship supports Tallaght West students recommended by local schools to access third-level education.

A total of 29 students have over the past 12 years benefited from the scholarship, which has supported them in paying for tuition fees and or in the purchase of laptops to aid them in their studies.

Speaking to The Echo, Ms McMahon explained how awardees who have been recommended by their schools receive the scholarship for being role models to their community and other pupils.

Over the years, the FitzGerald Scholarship, according to Ms McMahon, has made young people believe in themselves as the award instils confidence in them to achieve anything – despite barriers they may face.

In 2016, many neighbourhoods continue to struggle with higher education access with less than 30 per cent enrolling.

Ms Mahon said: “An Cosán continues to be committed to removing these barriers to education through innovative access programmes and continued funding opportunities with a particular focus on part time students who are currently excluded from national funding programmes.”