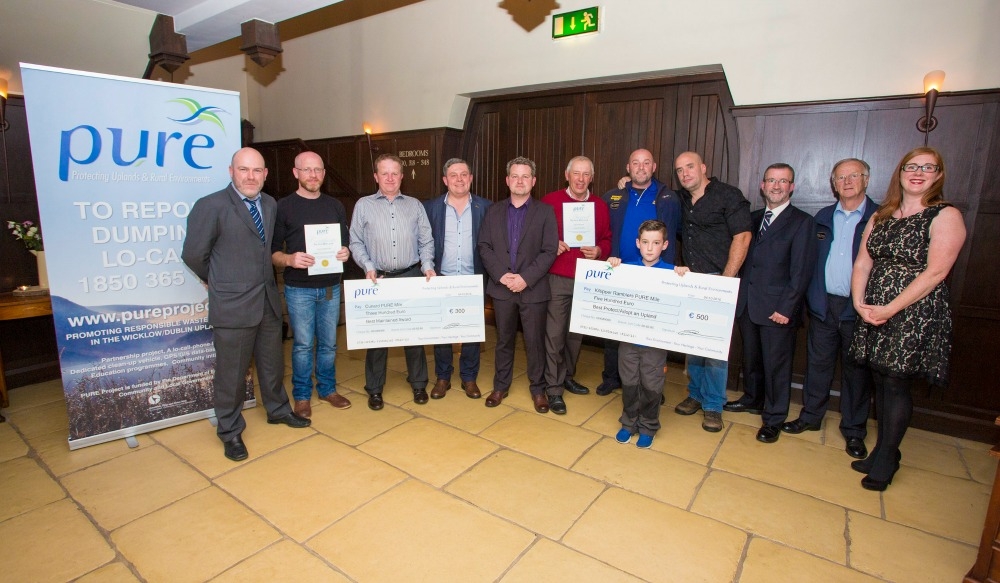 AS SIGNS to report illegal dumping are erected at the foothills of the Dublin Mountains, two local groups are recognised for their efforts in fighting litter and illegal dumping in the area.

The Pure Mile Awards, an environmental competition that encourages communities in South Dublin and Wicklow to keep a mile stretch of road rubbish free, were staged on Tuesday – with the Kiltipper Ramblers and the Glenasmole community both recognised for their voluntary efforts in fighting illegal dumping.

In recent weeks, the Pure Mile Project has erected signs in and around Horan’s Lane, Ballymana, Kiltipper and Kiltlown Lane, which are the entry points to Tallaght from the Dublin Mountains – and locations that are hot spots for illegal dumpers.

The signs are encouraging people to report illegal dumping, and the people who they may witness doing it, to Pure’s dumping hotline, 1850 365 121.

These locations have also been adopted by the Kiltipper Ramblers, which has taken ownership of 10 miles of upland roads – with the walking group removing tonnes of illegal dumping throughout the year, organising massive clean-ups and planning additional projects and initiatives with Pure.

For the difference they are making in the fight against illegal dumping, Kiltipper Ramblers was presented with the Protect/Adopt an Upland award.

Another local group that picked up an award is the Cunard Pure Mile group which, made up of residents from Glenasmole, scooped the Best Maintained Pure Mile Award.

Energetic and committed, the Cunard group has a long history with the Pure project, with residents a shining example of what can be achieved when people unite for the betterment of their community and environment.

Ian Davis, Pure Project Manager, said: “I am always amazed at the difference a Pure Mile group can make to an area.

“Tonnes of illegal dumping and rubbish were removed from South Dublin Uplands, and it is a real credit to all of the communities and organisations who get involved.

“They dedicate so much energy, time and enthusiasm, and I congratulate all of the groups involved in this year’s competition.”

Mr Davies told The Echo how Pure, which is this year celebrating its 10th anniversary, is inviting groups in Tallaght and South Dublin to join them in caring for the uplands.

The organisation, which removed 20 tonnes of illegal waste from South Dublin in August alone, has also encouraged residents to report illegal dumping, and Pure will organise for rubbish to be collected.

For further information about this, visit www.pureproject.ie or report dumping to 1850 365 121.