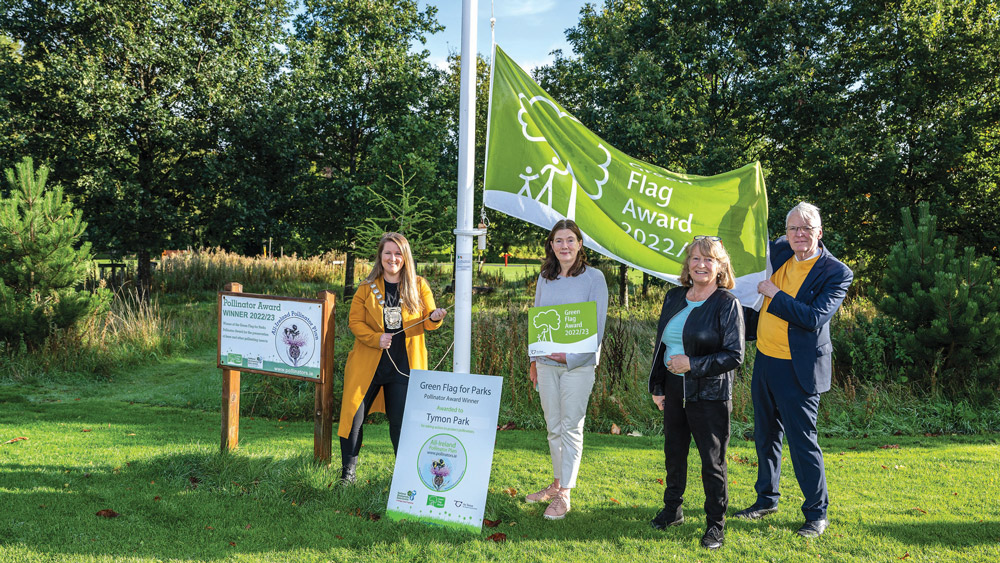 TYMON Park has won the prestigious 2022/23 Pollinator Award for the Best Town Park in Ireland as part of the Green Flag scheme.

The flag was raised by Mayor Emma Murphy in an event in the park celebrating the win last Friday (September 23).

Mayor Murphy said: “Over the past number of years SDCC has greatly increased the number of natural meadows in parks and open spaces across the county including in Tymon Park.

“Presently Tymon Park has over 41 ha (100 acres) of long-flowering meadows that are being managed for pollinators.

“The primary aim of this action is to improve habitats for pollinators as one-third of our wild bees in Ireland are under threat due to a loss of food and shelter.”

The Pollinator Award is jointly run by An Taisce Environmental Education and the National Biodiversity Data Centre.

The award assesses pollinator-friendly management of parks and community spaces against the recommendations of the All-Ireland Pollinator Plan.

The park has also seen its Green Flag status continue, as it was awarded its fourth successive flag – which Mayor Murphy said shows the hard work of council workers and local volunteers.

“The Green Flag Award is an international benchmark that recognises and rewards high-quality parks and green spaces.,” she explained.

“This year over 2,300 public sites in 16 countries around the World have achieved Green Flag or Green Flag Community Award status. The award scheme is managed in Ireland by An Taisce.”

She added: “Tymon Park is one of 104 Green Flag sites in Ireland, this is comprised of 85 formal public Green Flag Park sites, along with 19 volunteer run Green Community Sites.

“This award is a huge honour for everyone in SDCC and park users, I believe the Green Flag demonstrates how much care and effort the park’s staff put into maintaining the park and how much the local community use and appreciate the park.

“A special mention must go out to the Friends of Tymon who play an active role in the park providing community participation, litter picks, and getting involved in engagement on new initiatives and park maintenance – all of this feeds into the Green Flag application and management programme for the park.”

NEWER POSTTea Party Girls brew up for hospice and raise €1,750
OLDER POSTCouncillor asks for litter bins to be emptied on regular basis