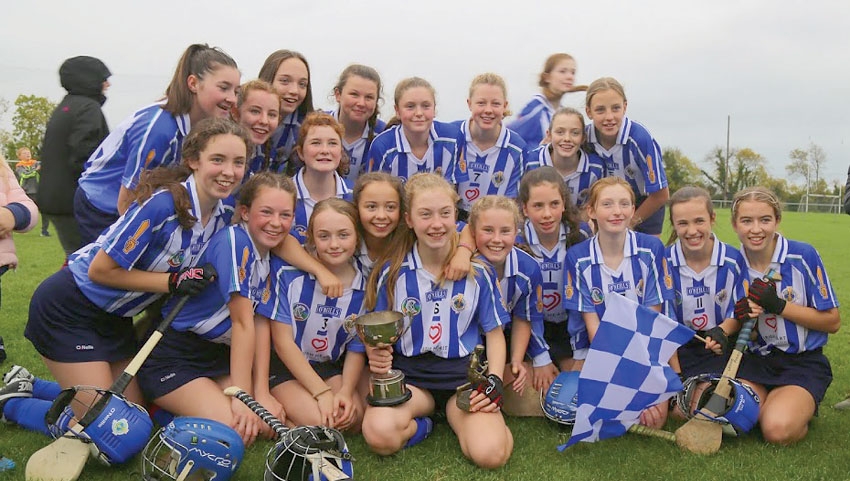 Under 13 double for Ballyboden

TWICE Ballyboden St Enda’s got the better of strong challenges from Lucan Sarsfields opposition in Under 13 Camogie deciders last weekend.

The Firhouse side’s work in the first half proved enough to see them through the strong challenge posed by their 12th Lock opponents in Sunday’s Under 13 Division Three Camogie Shield title match.

The Firhouse Road side emerged 2-1 to 1-1 winners, with all of their scores coming in the opening half, starting with superb strike to the back of the net from distance by Laura Dunne.

Anna Lambert then served up a point before Kate O’Brien saw the ball home for a second Ballyboden goal that appeared to leave them well in control.

The Lucan team, which is a combination of Under 12 and Under 13 players, refused to grow despondent and began to fight back in the second period.

Lucy Fox, with a beautifully-taken free, put their first point on the board, and it was not long before they added a goal to that.

Captain, Rachel Fox made one of many impressive solo runs down the wing, this time carving her way through the formidable Ballyboden defence to see the ball over the line.

Lucan continued to press, but were unable to serve up that goal that would have squared the tie.

The entire Ballyboden team, including their four substitutes had to work hard to keep their opponents at bay, Allana Newe playing her part superbly at wing forward before being moved into defence.

Erin Jones, Kelly O’Brien, Erica Collins and Sinéad Farrell all worked tirelessly for Lucan, as did the entire team, but it was Boden who emerged winners.

MEANWHILE Ballyboden’s St Enda’s Under 13 camogie team came out on top in the Division One Champion-ship final beating Lucan Sarsfields 4-7 to 1-4 at Trinity Gaels GAA Club on Sunday.

Boden who took the lead with an Abbie Brennan point before Lucan’s Sophie McIntyre broke free and netted from close range.

This was followed up with a couple of points from Sarsfields as they started to get on top although Boden captain Clodagh Reid pointed to leave just four between the sides at the break.

Indeed the gap could have been bigger only for a point blank save from Boden keeper Shauna Feely and a courageous block from Megan Deignan.

Lucan’s lead did not last that long as Ballyboden scored from a goal after a goal mouth scramble and then Aine Rafter sent over a point to level matters.

Sarsfields did edge back in front when Sinead Daly converted a free however Enda’s Leonie Power fired home a goal to give her side the lead.

This was followed up with a pointed free and a goal from Aine Rafter. Another point followed by a goal from Player of the Match Clodagh Reid put the game beyond reach.

The win rounded off a fine season for Ballyboden who have now completed the double after winning the league earlier in the season.