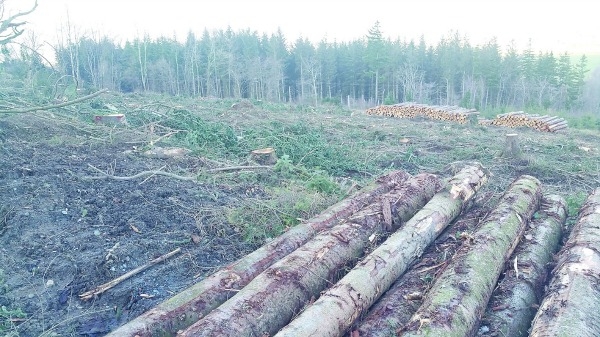 Uproar over mass felling of trees at Hell Fire Club

COILLTE has been questioned by members of the public over the clearing of hundreds of noble fir trees close to the Hell Fire Club in the Dublin Mountains.

Between January 7 and March 1, Coillte carried out an “essential harvesting operation” of noble fir trees at the Hell Fire Club, a massive clearing which has left many locals and users of the natural woodland upset and concerned for the future of the forest.

Forest walker Eamon McElwee told The Echo: “I went walking a few weeks ago at one of the most beautiful woodlands enjoyed by many . . . and I parked the car in the usual car-park.

“I was hoping to leave the stresses and strains of modern living behind and breathe some fresh woodland air in the mature forest.

“I noticed there was a new walkway, which I was a little surprised at, but my jaw nearly hit the ground when I saw what Coillte had done to trees older than I am.”

He added: “It is an absolute disgrace what capitalism permits.

“Complete destruction of a landmark forest seen from Dublin city. Totally wiped out and destroyed in such a short space of time.

“This is the worst man-made natural disasters of parkland beautiful mature forest and I have no idea why not one single member of the public did not cry for it to stop.”

A recent article by The Echo on a proposed €19 million tourism plan for the Hell Fire Club also prompted people, reading the article online, to comment on the mass tree harvesting – comparing the area to a “lumber yard”.

When contacted by The Echo, a spokeswoman for Coillte said: “Coillte carried out an essential harvesting operation of Noble Fir trees in the Hell Fire Club as the trees had fallen over or suffered damage in storms, blocking the forest track and posing a risk to recreational users of the forest.

“Further to this and as part of the consultation process for the planned felling at Hell Fire, Coillte erected signage at the carpark to inform the public harvesting was commencing, consulted with local residents and stakeholders, including the Dublin Mountain Partnership (DMP) and posted notices on Coillte and DMP websites.

“A Coillte staff member was also on site throughout the operation for health and safety reasons and to answer any queries.”

The Echo was unable to get confirmation on the number of trees cut down.

However, Coillte did confirm that the timber was sold to an Irish sawmiller and that the entire area will be fully replanted in line with Coillte’s sustainable forest management policy.

Beech trees planted before 1900 as part of Massy’s Estate were retained during the harvesting operations.