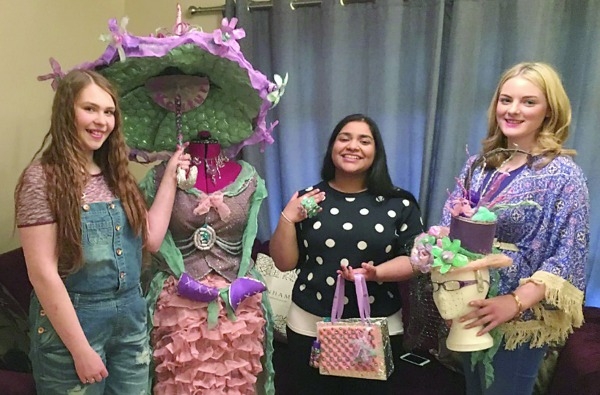 A TALENTED aspiring fashion designer from Old Bawn Community School has made it to the regional final of the Junk Kouture competition.

Sixteen-year-old Lily Rose Chatham, who is currently in Fifth year and whose unique designs have featured in The Echo’s selfie competition and Christmas tree competition, will be joined on her team by her classmates Grace Nestor and Helana Paul Maliakal.

As part of the competition, Lily Rose and her team had to design an outfit from recyclable materials, and have named their outfit theme Uptown Punk.

Uptown Punk includes a mixture of styles inspired by steampunk, anime cartoon and the Clara Oswald character from the Victorian Doctor Who episodes.

Speaking to The Echo about her designs, Lily Rose said: “I only found out about the competition last year.
“I tried to enter it then, but I was too late. It’s great to make it to the regional finals and it would be great to go even further in the competition.

“I hope to do fashion design in college after I finish my Leaving Cert, I’m really into everything to do with fashion.”

Recyclable items used as part of the Uptown Punk dress include Christmas tree netting and flooring underlay on the dress and a broken communion umbrella.

Lily Rose and her team will be attending the regional Junk Kouture competition on March 3, but need support ahead of the competition through votes from people in her local area.

Voting starts on Monday, February 22 and will continue until Friday, February 26 at midnight – votes can be cast once a day online on the Student BOI (Bank of Ireland) Facebook page.

Further information about the Junk Kouture competition can be found HERE