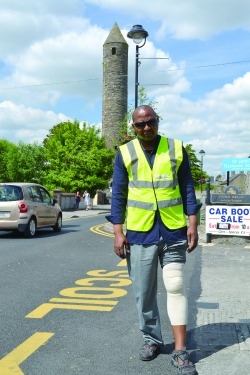 CLONDALKIN Tidy Town volunteer Alpha Gassama was assaulted whilst carrying out his clean up duties on Tower Road at the weekend.

Former asylum seeker Alpha, was chased outside the Intercultural Centre by two men and assaulted, on Saturday morning, after a verbal interaction at traffic lights sparked the incident.
Alpha said: “I was waiting for the traffic near the garda station, and they (motorists) started insulting me racially. Then they went off and I continued on up the road, but they came back around.

“One of them threw something metal at my head. Luckily it missed me. I ran but couldn’t run anymore and they were over me, threatening to beat my skull. Traffic stopped on the road, and a couple came to help me. I went to Tallaght Hospital and have injured ligaments in my knee.”
A witness who intervened in the incident, but who did not wish to be named, said he saw the motorists “running down the road after him.”
He said: “One of them had a baton. They were shouting ‘don’t touch my car’ but there is no excuses for carrying around a baton in your car. It was all over very quickly.”
Arriving in Ireland from Guinea in 2004 to escape civil unrest, Gassama spent nearly a decade in Direct Provision centres, including the Towers Hotel in Clondalkin.
He was a founding member of Clondalkin Tidy Towns and local politicians and representatives, rallied to prevent his deportation in 2013, recognising his dedication to community initiatives.
Whilst he has encountered verbal racism before, Alpha concedes “this is the first time it got physical.”
“Minister for Justice Frances Fitzgerald’s office is minutes away, what is she doing about attacks on immigrants,” he said.
A garda spokesperson said: “Gardai are investigating a minor assault on Tower Road, at approximately 11.20am on June 20. Anyone with information can contact Clondalkin Garda Station at 6667600.”