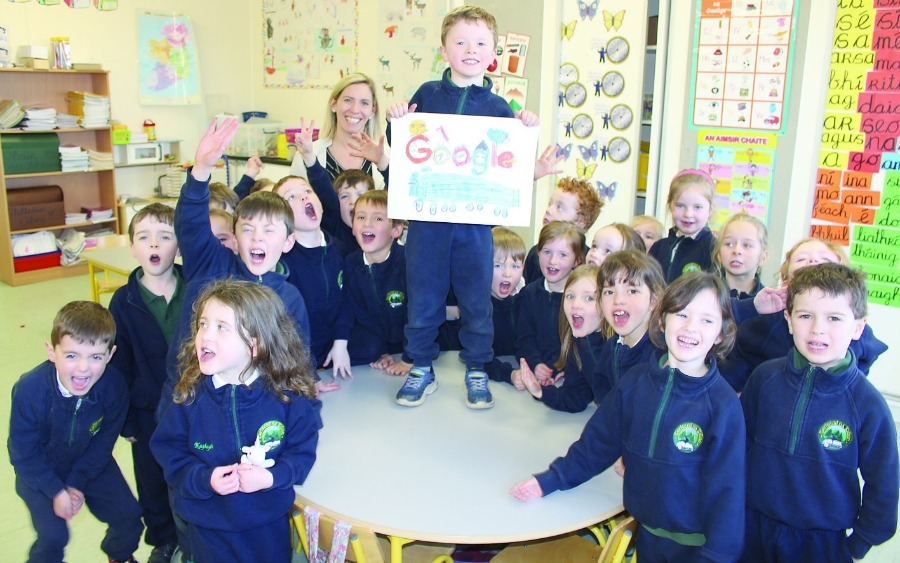 A HAPPY robot called Tom that is capable of doing children’s chores, and a train for birds to travel in when the weather is bad, are the Doodle 4 Google creations of two local school kids – who have been shortlisted for the final of the national art competition.

Students from Scoil Carmel and Gaelscoil na Giuise in Firhouse have done their school and hometown proud after they were shortlisted from thousands of entries to be listed among 75 finalists – but they now need the public’s vote to get to the grand final on April 3.

Each year the competition has a theme, with young artists this year asked to design a doodle on, ‘If I could create anything it would be . . .’

Erica Redmond, who is a six-year-old senior infant student in Scoil Carmel, was shortlisted after she created a happy robot called Tom to help with her chores and be her friend.

According to Erica: “Tom is always happy and loves to play games with me.

“I gave him multi-coloured legs because I love rainbows. I used all the letters from Google as parts of my robot, the Gs are ears, the Os are eyes and the L and E are my robot’s power switches connected with curly cables.”

Erica’s class teacher Ms Teresa Lea told The Echo: “This is Scoil Carmel’s fifth time to take part in the competition and it’s a great way to get the kids to think creatively and outside the box.

“It also gets them into design as they have to create their doodle around the word Google.”

Only a few minutes up the road, Scoil na Giuise is also celebrating student Oisín Ó Máirtín Ó Duílearga’s success in the competition, after the six-year-old’s Éan traen (Bird train) was shortlisted by judges.

Joanna Uí Chúláin, of Gaelscoil na Giuise, which this year entered the competition for the first time, said: “Oisín loves to draw birds and other animals and he decided to design a train that ‘éin/birds’ could travel in if the weather was bad – which was very thoughtful and considerate.

“Oisín is a talented boy and the entire school community are thrilled that he has made it to the final stage.

“We believe this is an excellent achievement for a new school and are only too delighted to showcase our students’ talent.
“Scaip an scéal chun vótáil d’Oisín agus an éin traen.”

Voting will close on February 21. Visit https://doodles.google.ie/d4g/  to vote and to secure a €10,000 technology grant for a local school.