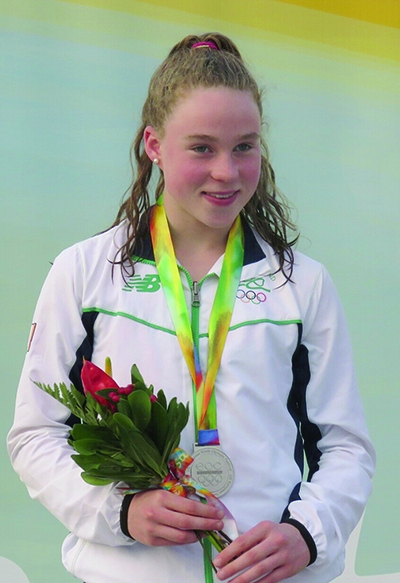 ELLEN Walshe played her part in what was Swim Ireland’s most successful European Youth Olympic Festival outing when she captured silver in the 100m Butterfly in Tbilisi.

It marked the Templeogue Swim Club star’s first international medal and took Swim Ireland’s tally at this event to five after both Conor Fergus and Tallaght’s Antoinette Neamt had each twice made the podium.

Thirteen-year-old Walshe had set an Irish Junior record in the 100m Butterfly semi finals after she clocked 1:01.72.

It put the icing on a great week for Walshe who had previously finished fourth in the 200m Butterfly before registering a new PB in the 100m FC and helping the Irish Mixed Relay team to fourth in a new Irish Junior record time.

Tallaght’s Niamh Coyne made two finals in as many days and clocked a new personal best 2:37.83 on her way to sixth place in the 200m Breaststroke.

Her clubmate Neamt had previously finished runner-up in the 400m Freestyle with a time of 4:16.61 that was not only a PB but also inside the qualification time for next year’s European Championships in London.

It marked her second podium placing at this event after she had secured bronze in the 800m Freestyle just .13 of a second behind silver medallist Barocsai.