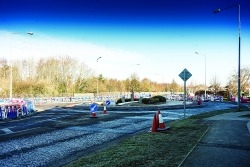 West Dublin to get €1.5m injection for traffic upgrades

FUNDING totalling €1.5 million has been made available for traffic improvements across west Dublin.

The funds will be granted to South Dublin County Council from the National Transport Authority for vital works in Clondalkin, Lucan and Palmerstown.
One of the major road refurbishments will be taking place in Willsbrook where the council plans to widen the road to create two formal lanes approaching Outer Ring Road Traffic Lights.
The works, which were previously proposed by Fine Gael councillor William Lavelle, will cost in the region of €500,000.
The additional €1 million will be spent for various works in Clondalkin, Palmerstown and Lucan, including €300,000 to complete the Palmerstown cycle paths.

For see page 5 of this week’s Echo.