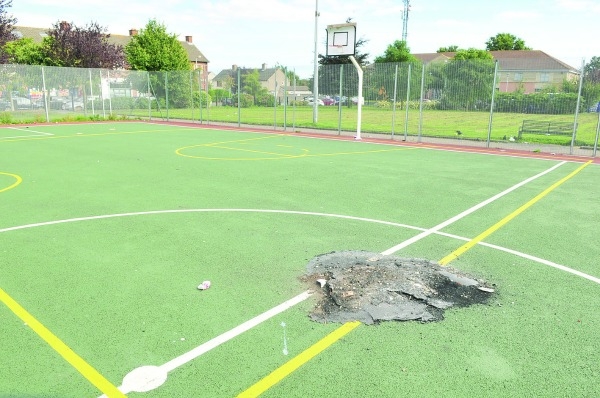 BRAZEN youths set fire to a wheelie bin on an all-weather pitch, that is directly facing Ballyfermot Garda Station.

The incident occurred two weeks ago at Drumfinn Park, and has been labelled a “mindless act of vandalism”, according to Independent councillor Vincent Jackson.

Cllr Jackson says the city council have spent up to €37,000 on the facility, and have done a “great job improving the area over the last year.”

At an area committee meeting this week, he asked the local authority to repair the damage.

“It’s unbelievable that they could do this, and right in front of the garda station,” said Cllr Jackson.

“So many kids use the astro-turf, for the right reasons.”

The Echo understands the wheelie bin was taken from a nearby commercial premises at Drumfinn Park late at night.

Cllr Jackson continued: “It’s not their [premises] fault. Some bin providers are collecting at 6am, forcing bins to be left out overnight. That’s something that the city council needs to look at.”

With Halloween on the horizon, Jackson has appealed for residents to be “extra vigilant”, and says a lot of bins contain “combustible material.”

He also cited the need for urgent action to combat a number of dumping black spots in the area.

Cllr Jackson said: “I’m looking at 40 to 50 black bins every few weeks dumped on the side of the road. At Le Fanu Road, Drumfinn, Rosssmore and Gurteen, the level of dumping is horrendous. Bins are dragged to California Hills and set alight.

“I would have no problem with the council calling into each home, and asking for people to provide evidence of who their waste supplier is.

“The vast majority are good people in the community, but seeing this type of rubbish on the road, is like an invitation for more trouble.

“A number of people see no wrong in putting all their rubbish in public litter bins. I see the same people doing it every week. It’s brazen.”