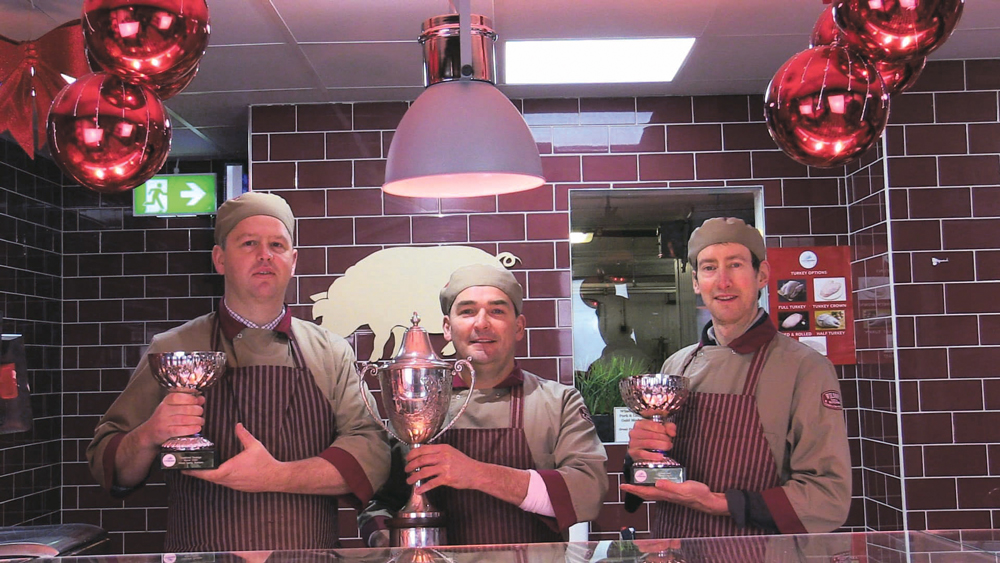 Wilsons Butchers (from left) Conor, Myles and Derek Wilson at the Tallaght premises

WILSONS Butchers, a long-established family business with premises in Tallaght and Rathfarnham, are the national supreme sausage and pudding champions for 2021.

The Associated Craft Butchers of Ireland, deemed Conor Wilson to be the overall national winner in the traditional sausage category.

Along with top prize in the annual competition, Wilsons also won the national Spice Beef Championship, received Gold in the Specialty Sausage (for their dinner sausage), picked up another Gold for their white pudding and a Silver was bestowed on their pork and leek sausages.

Led by cousins Conor, Myles and Derek, the second generation butchers are delighted to follow in the footsteps of their own fathers and uncles (Myles, Harry, John and Tom), who established the family enterprise in 1969, and won the sausage of the year championship in 1982.

The original founding members opened the shop in Tallaght in 1974 and expanded in 1975 by opening another shop in Rathfarnham Shopping Centre.

“It is the Oscars of sausage and pudding makers, our fathers and uncles used to say ‘well we won it in 82’ but now we have won the same award,” said Conor Wilson.

The awards arrive on the back of a significant investment of €180,000 in renovations at their Tallaght store, located at St Dominic’s Shopping Centre.

“It’s an investment in Tallaght,” said Conor. “Generally, Covid has been good to the butcher. People have not been going to the pubs, they have spent more time at home, and the Sunday roasts are back. It has been great to see young people coming back in.”

Wilsons sell three times as much sausage and white pudding in Tallaght as they do in their Rathfarnham premises, but a close relationship with their clients, ensures they keep producing quality products, lest they receive a scolding.

“If you change the recipe slightly, and put in too much pepper or a half ounce of herbs, the customers in Tallaght will let you know all about it the following week,” quipped Conor.