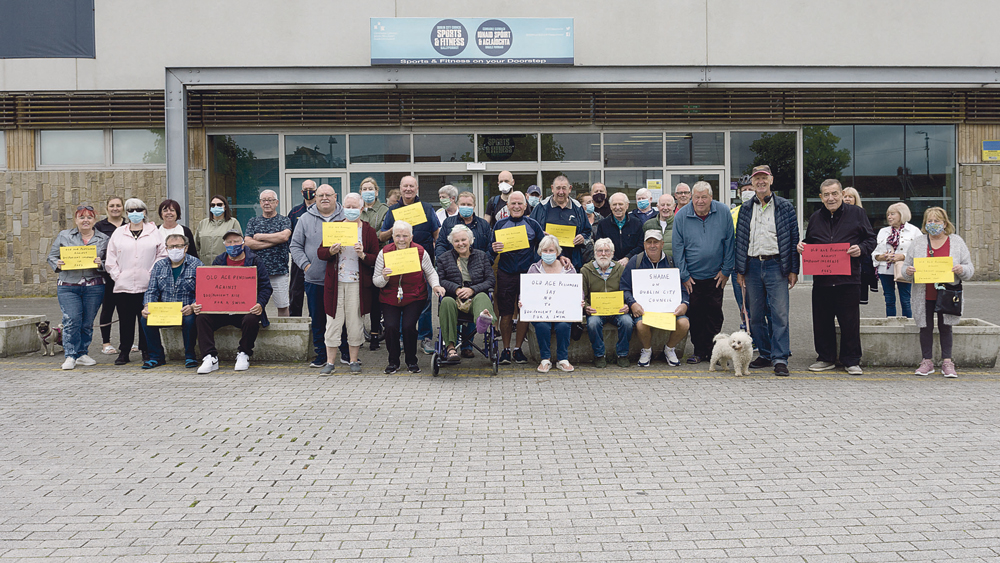 PENSIONERS have been successful in their efforts to reverse a significant increase in fees to access a leisure centre in Ballyfermot.

A protest took place on September 1, outside the Sports & Fitness Ballyfermot leisure centre, after OAPs discovered a change to the payment model.

George Hynes (71), a Ballyfermot resident and member of the centre, said OAPs were paying €20 a year but this had changed to €15 a month.

The OAP’s were working on a petition amid plans for another protest on September 15 outside the Dublin City Council facility.

“We got great support, the protest would have been this Wednesday and we had close to 1,000 signatures,” said Mr Hynes.

“From talking to them, my under-standing was they were scrapping the increase. I asked ‘are you officially informing me this” and Brid Smith TD got in touch with the council to confirm this in writing.

Deputy Brid Smith (PBP), who was at the protest two weeks ago, fully backed the pensioners’ efforts, and said the reversal was important because it could have led to OAPs seeing price hikes across the city.

“That is important, not only in Ballyfermot, – there has to be the same advantages for OAPs, free travel and access to community facilities. For that to be taken away from them would have been a backward step. It showed the power of the ‘grey voters’, rallying and sticking together.

“They pushed back against this vicious 800 per cent increase. I wrote to Richard Shakespeare (DCC Assistant Chief Executive) to confirm it in writing yesterday [Monday]. I congratulate the OAPs. It shamed the council.”

Two weeks ago, DCC told The Echo that the annual charge of €20 for pensioners “is not considered a membership, it is an administration/ registration fee.”

Closed for most of the last 18 months and badly hit in terms of income during Covid, the centre re-opened in June 2021 operating under strict new government public health guidelines.

DCC told The Echo on Tuesday: “The recent announcement from government outlined re-opening dates for sports and leisure. The council has reverted to pre-covid membership and administrative charges as services return to normal.”

George Hynes said that “everybody was delighted” with the news and a return to affordable access for OAPs.

“This morning I went for my 7am swim,” he said.

“Before Covid, we could go upstairs to the gym and then down to the pool. You can only do one at the moment, it is not open completely, but hopefully that will change.”