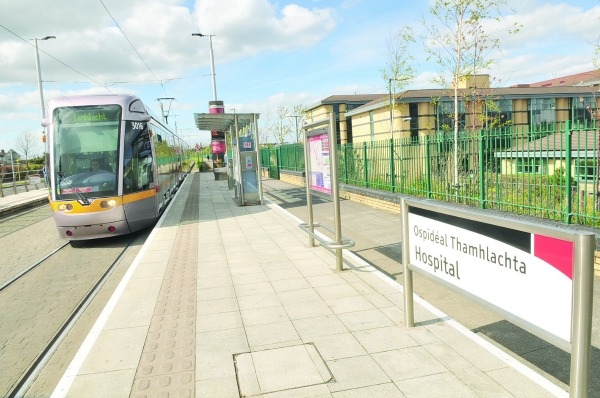 Work on new entrance to Tallaght hospital to start soon

WORK on the long-awaited pedestrian access lobby linking the Hospital Luas stop with the local health facility is set to commence this summer.

Back in 2013, hospital management made a decision to make Tallaght Hospital more accessible for patients by opening an entrance from the Hospital Luas platform – cutting out the walk for patients, many of whom are elderly, from the Luas stop around to the main entrance of the hospital.

In May 2015, planning permission was granted by South Dublin County Council for the refurbishment work that would provide for a new pedestrian access lobby linking the existing Luas stop. However, work has yet to commence.

This week when contacted by The Echo, a spokesman for Tallaght Hospital said: “Due to the hospital’s focus on other clinical priority projects which supported direct patient care in 2016, this Luas entrance project was deferred from the original start date.

“These works are now planned to commence in the summer months and with a September 2017 completion date.

“The design has been finalised and planning permission secured.”

The issue was also discussed in council chambers this week after Sinn Féin councillor Cora McCann tabled a motion seeking support for the opening of the gate beside the Hospital Luas stop.

Cllr McCann said: “I have had a few calls recently from people using public transport, especially the Luas, and from residents living in Springfield who have asked that the access route be opened . . which would make accessing the hospital a lot easier for patients.”

The motion was passed and South Dublin County Council will write a letter to Tallaght Hospital seeking the opening of the access route.

NEWER POSTCrime Special: Anti-social behaviour on the rise in Lucan
OLDER POSTWork on new HSE nursing unit in Tymon to begin this week