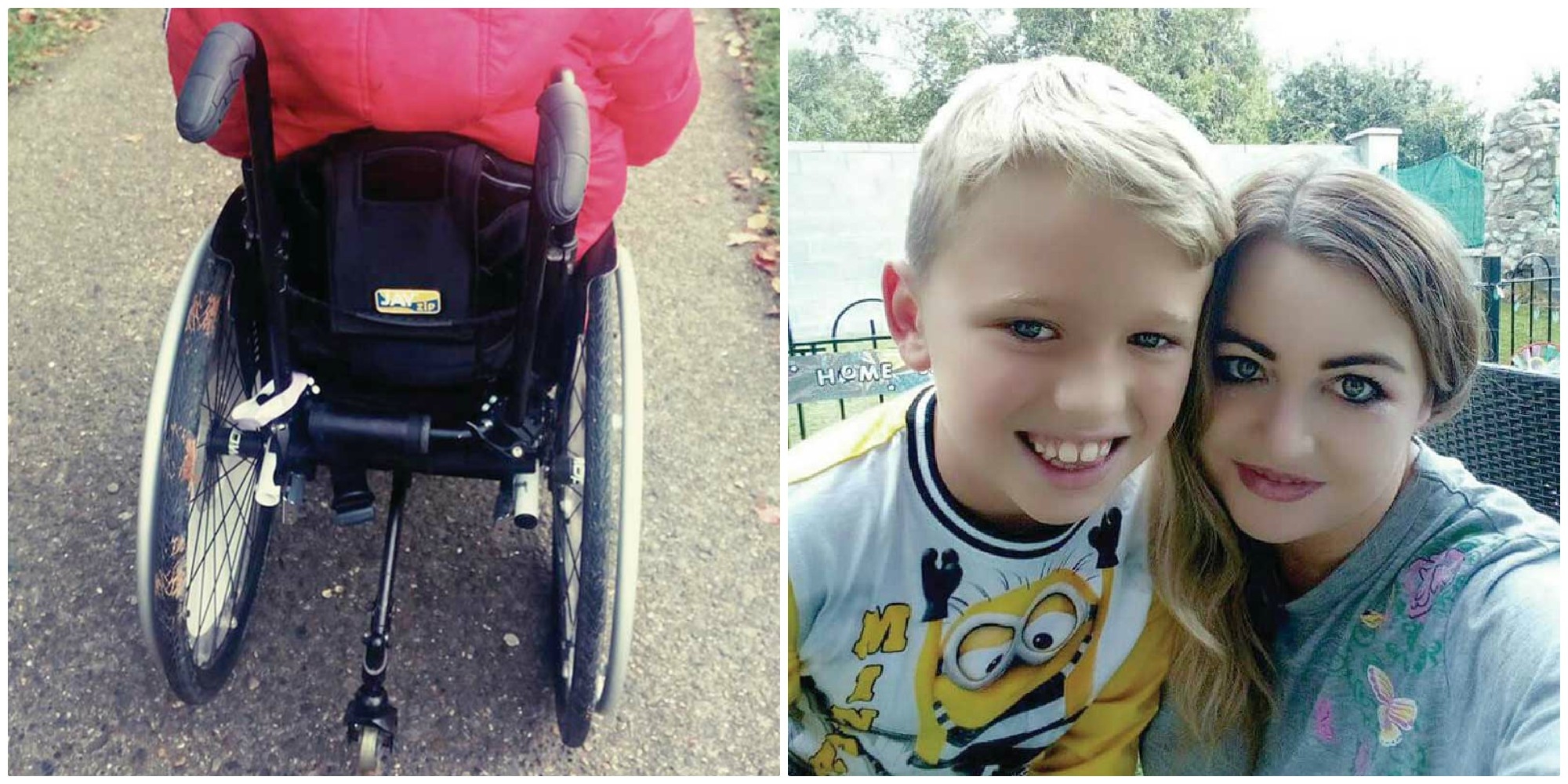 THE sticky situation of dog owners not cleaning up after their pets is back on the agenda, after a nine-year-old boy’s wheelchair was destroyed while on his way into school.

Jacob Keenan, who lives in Firhouse, has cerebral palsy and uses a walking frame to get around.

However, some days, if his muscles are tired, the nine-year-old uses a hand-pushed wheelchair – and it was on one of these days that he fell foul of an un-scooped pile of poop.

Speaking with The Echo, Jacob’s mam Lynn said that Jacob’s wheelchair was destroyed one morning after she had transferred Jacob from her car to his wheelchair outside of his school, St Kevin’s in Kilnamanagh.

“I pulled up outside the school to drop Jacob off and put his wheelchair in the grass while I transferred him from the car,” Lynn said.

“There was dog poop in the grass and it went on his wheelchair, and Jacob was just about to put his hands on the wheels when I spotted it.

“I managed to get some of it off with baby wipes but the chair had to be power-washed later.”

Luckily for Jacob he had his walking frame in school that day, so he didn’t miss any class.

However, Lynn has highlighted the issue in the hope that dog owners may see the negative impact un-scooped poop can have on a person’s day and their health.

“Jacob was lucky that I was there with him, but what happens to a wheelchair user who may be on their own in this situation?” Lynn said.

“People need to be more mindful and pick up after their dog.

“I have a dog myself and pick up after him, even though I could be left carrying the bag for 15 minutes before finding a bin.

“It is people’s responsibility to pick up after their dogs but I think the council could install more bins around.”

She said: “It is a disgrace that someone let their dog foul right outside the gates of a school, and thinks that it’s acceptable.

“There isn’t a parent in Ireland who hasn’t seen their children dragging dog poop through the house, and the fact is that it is dangerous. It can damage a child’s eyesight permanently.

“I am asking dog owners to cop on, and also calling on local authorities to think about patrolling parks and outside schools in the mornings to target and fine offenders.”

Cllr Holland also criticised the lack of enforcement from South Dublin County Council, claiming that two dog wardens and five litter wardens is not enough to cover the whole county.

When contacted by The Echo, Mary Maguire, senior executive officer with the council’s environment, water and climate change department, confirmed that only one fine has been issued in relation to dog fouling so far this year.

She said: “The difficulty with enforcement of this particular section of the [Litter Pollution] Act is the requirement for witness testimony, to report that the offence happened and that an identified person is the person in charge of the dog.

“Therefore the council continues to encourage residents groups and individuals to assist the Warden Service in this regard.”

Ms Maguire also said that dog bag dispensers were piloted in parks in Rathfarnham and Rathcoole which “surprisingly, did not record any major improvement in littering”.

The council is also sourcing dog poop scoopers to issue to groups as part of its litter management action plan 2018.