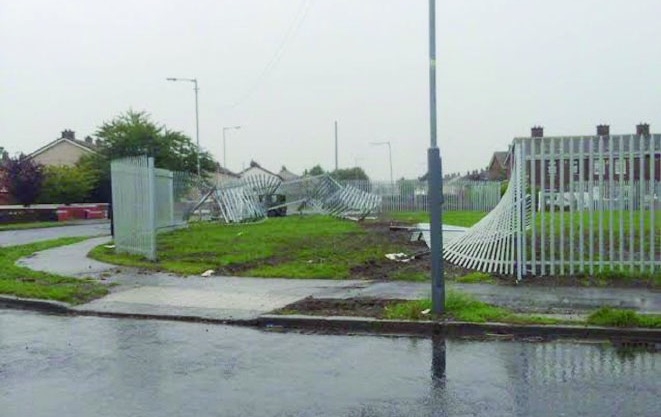 STAFF from Dublin City Council were intimidated and threatened by youths as they attempted to remove a burnt out stolen car, at the site of the proposed modular homes in Cherry Orchard.

Joyriders smashed through security barriers at the site late on Friday night.

Sinn Féin Councillor Daithí Doolan was first to respond to the damage, contacting Dublin City Council on Saturday morning, and remaining in contact with authorities throughout the day in an effort to secure the site.

Cllr Doolan said: “The damage done to the building site is unacceptable. It puts local people, particularly children, at risk. Those involved should stop for a minute and just think about the damage they are doing to Cherry Orchard.

“I contacted both the council and gardaí several times to try and clean up the damage and repair the fence. It was very frustrating for local residents who had to wait so long for a response. I have urged Dublin City Council to employ security to prevent this happening again during the construction of these homes.”

Residents blasted the “disgraceful actions” of the joyriders, whilst others have questioned why more social housing is going into a community let down by a chronic lack of investment and suffering high rates of anti-social activity.