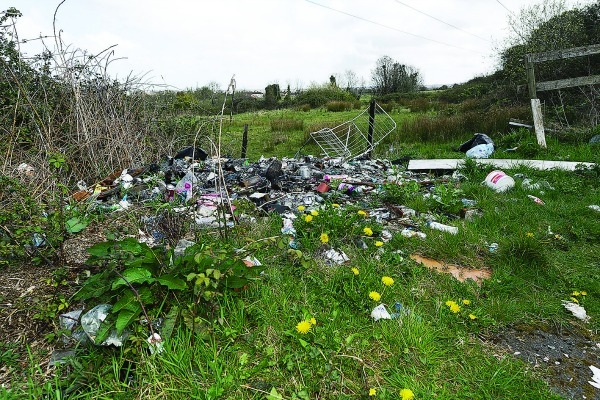 JUST under €16 million has been spent on the removal of illegally dumped waste and the general cleansing of estates by South Dublin County Council in the past two years – during which, the local authority removed more than 8,000 tonnes of illegally dumped material.

Illegal dumping is eating away at the council’s budget, with money that could be invested into the enhancement of community services and facilities being diverted into the removal of the illegal waste – with the council collecting 3,700 tonnes of waste in 2014 and 4,500 tonnes in 2015.

According to figures provided by the council to The Echo, €6.88 m was spent by the local authority on the removal of illegal waste, estate cleaning, litter picking and the litter warden service in 2014 while in 2015, €7.08 m was spent.

Helen Griffin, of the council’s environment section, said: “While illegal dumping occurs in all parts of the county, areas such as rural roads, laneways and industrial estates are often subjected to persistent dumping.

“In addition, open spaces and local parks are used for the burning of household waste by a small minority of residents in some estates.

“In certain areas for which a number of persistent complaints were received, the council has discontinued ad hoc clean-ups and included these areas in the schedule for weekly checking and clean-up.”

With around 600 litter bins, two civic amenity centres and 74 recycling and bring centres, South Dublin County is a vast and diverse landscape that has seen the council introduce various technologies to encourage “pro-social behaviour” that discourages activity such as graffiti and illegal dumping.

Last year the council spent €54,869 on technologies such as static CCTV, rapid deployment cameras and audio message devices, which resulted in the elimination of dumping at the bring bank sites in Bohernabreena and Kilakee car park, a 65 per cent reduction at the bring bank at Ballyowen shopping centre in Lucan.

Incidences of dog fouling also reduced by an average of 63 per cent across three locations.

Nearly €500,000 was also spent by the council on education and awareness, with a number of campaigns initiated that promote the anti-litter message and increase local people’s understanding of how to best manage waste while highlighting the negative impacts of littering and dumping on the county.

“In many cases it is believed that the identity of those responsible for illegal dumping and the burning of waste is known.

“However, in the absence of clear and substantive evidence or witness statement and the presence of such witness in court, it is not possible to bring successful prosecutions.

“Therefore it is essential that residents and the public at large support the council in efforts to identify culprits where/if known, and to provide the necessary information to assist in getting more cases of illegal dumping and burning of waste into court.”

To report illegal dumping or littering call the council’s litter warden hotline on 4149220 or the Environmental Protection Agency’s anti-dumping hotline on 1850 365 121.