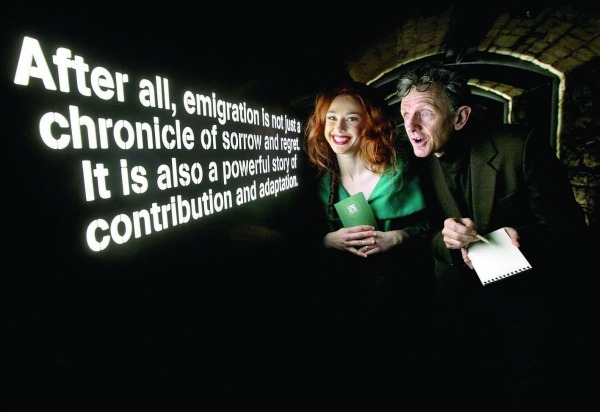 A NEW visitor experience that showcases, through technology, the unique journey of the Irish people around the world has opened in Dublin writes Mary Dennehy.

Called EPIC Ireland, the attraction, which is located at the Chq Building on Custom House Quay, tells the story of 10 million journeys and the roots of 70 million people.

Officially opened last Friday by former President of Ireland, Mary Robinson, the new high-tech designed centre promises to capture the footprint of the global Irish family across 21 interactive galleries – which illuminate the tales of Irish communities overseas – past, present and future.

Housed in the Chq building, a historic stone and iron warehouse built in 1920, EPIC Ireland tells the story of the Irish people’s dispersal throughout the world over the ages, with visitors taken on a journey that starts in Ireland and end with the global presence of the Irish today.

Branded as entertaining, engaging and educational, those behind EPIC Ireland are hoping that it will act as a “jumping off” point for visitors and locals alike, with the centre suggesting onwards connections to other centres and museums where visitors can follow-up particular areas of interest in more detail.

When visitors begin their EPIC Ireland journey they will receive a stamped passport and follow a path through the 21 galleries, which are organised into four themes – Migration, Motivation to leave Ireland, Influence, the influence Irish people have had in their adopted homelands and Connection, which looks at where the Irish are now.