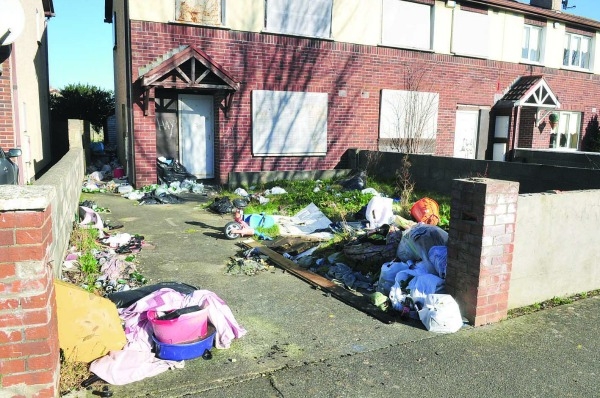 Abandoned property poses health and safety risk to nearby residents

TWO abandoned houses are causing a health and safety risk for residents in an estate – with one case likely to drag on for a while due to a “mystery” owner.

The two properties lie side by side on Kilcronan Avenue, Clondalkin, and were privately owned by separate owners.

They have remained vacant since at least 2013 – leading to persistent dumping and a cesspit of filth and rats to the rear of the homes.

Authorities have drawn a blank in their extensive efforts to track down the registered owners – with correspondence routinely returned as undelivered.

The sites have also been the subject of several inspections by the Environmental Health Office, and notices served under the Derelict Sites Act and Statutory notices – but to no avail.

After the properties were fire damaged in 2014, South Dublin County Council secured the houses to “prevent access and to remove any danger to the public.”

Sinn Féin Councillor Eoin Ó Broin forwarded a motion at the Clondalkin ACM last week, asking for a “report on the actions taken in the last two years by SDCC.”

Cllr ó Broin said: “I first came across this in March 2013. Number Six (house) is a classic case of a private owner who bought in the boom – rented it out and got caught with bad luck. He’s a decent fellow, but just didn’t have the financial means to continue and the bank repossessed the home.

“We’re confident of getting that resolved. Number Six is a short-term solution, but Number Eight is more long-term. The identity of the registered owner remains a mystery.”

In response to Cllr Ó Broin, SDCC said statutory notices, pursuant to the Derelict Sites Act, were delivered to the registered owners of both sites in July 2014, but “no response was received.”

Subsequent notices issued by the council were also returned as undelivered.

A SDCC spokesperson said: “As a result of persistent dumping, these sites have also been the subject of numerous investigations by the litter warden service.

“Unfortunately, it has not been possible to take enforcement action as no evidence has been found during any of the searches and no witnesses have come forward to identify those involved in illegal dumping.”

The council have carried out five clean-ups from the gardens at the two houses over the past two years.

Cllr Ó Broin is calling on the SDCC to clear the rubbish, take care of the properties, and start investigating a CPO (com-pulsory purchase order) of Number Eight – a legal function which allows statutory bodies obtain a property without the consent of an owner.

“To have two houses lying vacant with the critical need for social housing is unacceptable,” said Cllr Ó Broin.