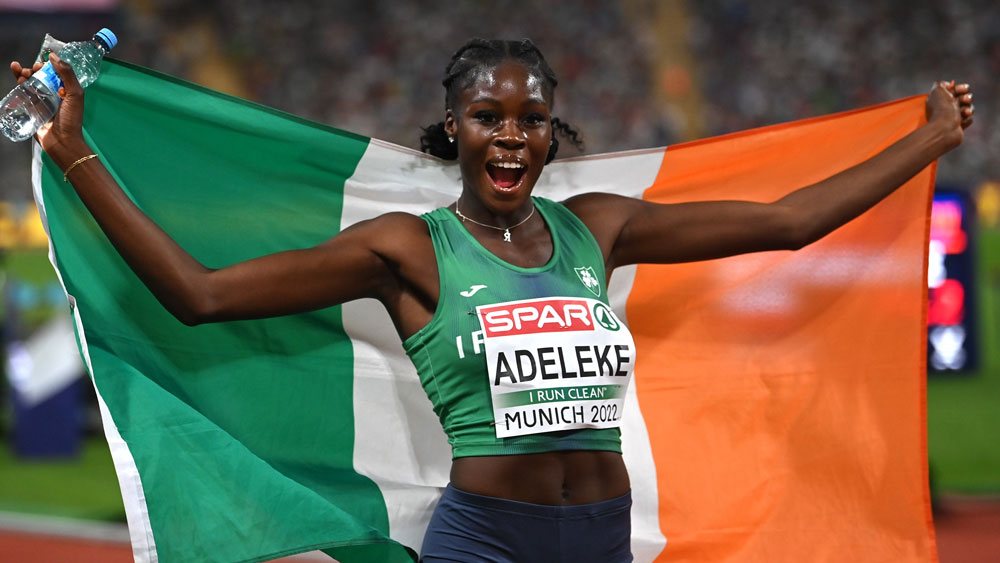 Tallaght’s Rhasidat Adeleke after finishing fifth in the women's 400m final with a new national record of 50.53 during day 7 of the European Championships 2022 at the Olympiastadion in Munich, Germany. Photo by David Fitzgerald/Sportsfile

Tallaght’s Rhasidat Adeleke produced a stellar performance to finish fifth in the 400 metres final at the European Athletics Championships in Munich this evening.

In what was her first appearance in a senior showpiece, Adeleke – a former student of Presentation Community College in Terenure – came home in a time of 50.53.

This set a new national record and when you consider it was only her second time taking to the track in the German capital this week, it makes her showing all the more remarkable.

Because she was comfortably ranked inside the top-12 coming into the Europeans (helped by an impressive display at the World Championships last month), Adeleke automatically qualified for yesterday’s 400 metres semi-final.

Having missed out on a final berth at the aforementioned World Championships, Adeleke was determined to leave a mark in her latest penultimate phase outing.

Coming home in a time of 51.08, she claimed third spot in Tuesday’s semi-final to ensure her participation in the 400 metres category was extended for another day.

She showed supreme intensity from the word go this evening and found herself in fourth place at an advanced stage in the final.

The 19-year-old Tallaght AC star (who is currently based out of Texas University) remained in contention for a podium finish until the bitter end, but Dutch Olympic medallist Femke Bol, Natalia Kaczmarek and Anna Kielbasinksa (both Poland) ultimately secured the top-three slots on the night.

Nonetheless, Adeleke can proudly proclaim she is fifth in Europe and with the 4 x 400 metres relay to come later in the week, she may well add another string to her bow before these Championships have reached a conclusion.