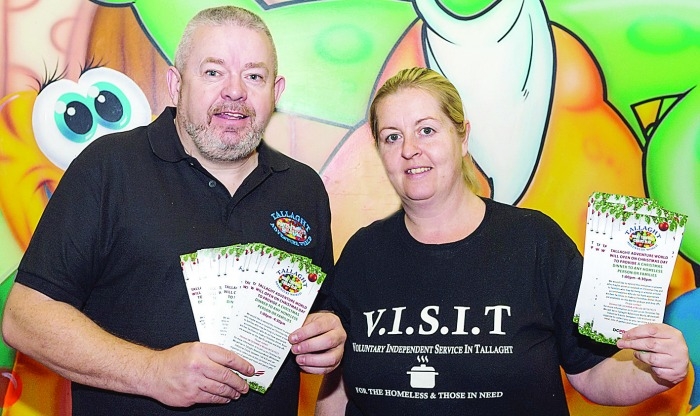 ‘Amazing’ support and donations towards Xmas dinner for homeless

THE community is uniting once again to host a Christmas dinner for the homeless in Tallaght this December 25.

Now in its third year, the free Christmas dinners fed more than 240 people who gathered last year in Tallaght Adventure World for the three-course meal, entertainment, gifts and packs of essentials such as toiletries and warm clothing.

Organised by Sinn Féin councillor Dermot Richardson, in partnership with VISIT, a Tallaght-based, volunteer-led soup kitchen, the dinner is available to homeless people and families living in Tallaght and its surrounding communities – with last year’s dinner experiencing an increase in families living in hotels without appropriate cooking facilities.

What started out as a Tallaght-based project has spread city and country-wide, with a courier last year dropping off soft drinks and 60 selection boxes from a GAA club in Kilkenny.

Councillor Dermot Richardson told The Echo that an invitation has been extended to individuals and families who are homeless – with people interested encouraged to get in touch and book their seat at the welcoming and inclusive dinner table.

Cllr Richardson said: “The outpouring of support has been amazing so far this year and we are full for volunteers.

“However, people who would like to help can still donate gifts, for both children and adults, warm, new, clothing such as scarves, gloves and socks, sleeping bags and food items.

“Anything that is left over after the day, including turkeys and hams, will be made into hampers and given to families in need.”
He added: “We’re looking at feeding more than 200 people again this year.

“This day is only possible because everybody works together, it is a whole community effort and is getting bigger and bigger.

“We have gotten so much support from people living here in Tallaght and further afield and alongside putting on a great day for individuals and families in need, it also raises the issue of homelessness – and reminds people that homelessness is more than a one-day issue.”

Anybody who would like to attend the dinner is encouraged to call Cllr Richardson on 087 2036468 or email christmasdaytallaght@gmail.com