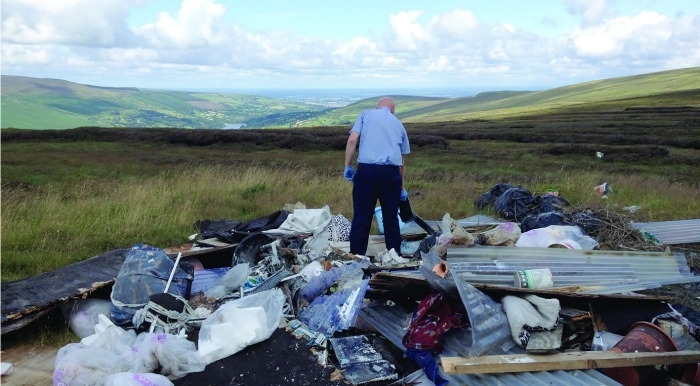 MOBILE, covert, night vision CCTV could soon be introduced across a number of illegal dumping hotspots in the Dublin Mountains, if funding is secured.

The Pure [Protecting Uplands and Rural Environments] Project was established in 2006 to combat illegal dumping and fly-tipping in the Dublin/Wicklow uplands – which is a beautiful natural amenity on the doorstep of South County Dublin.

Over recent years, a number of locations in Tallaght, which lie at the foothills of the Dublin Mountains, have been targeted by illegal dumpers, and include locations in Piperstown, Kiltalown, Horan’s Lane, Ballymana and Kiltipper.

Pure Project has for the past decade worked on the ground with communities to try and combat illegal dumping and, alongside removing waste, it has engaged with young and old through various education projects and the Pure Mile Competition.

However, the project has come to the end of its 10-year funding programme and is currently waiting on confirmation from the Department of Communications, Climate Action and Environment that funding is being continued.

Ian Davis, Project Manager for Pure, told The Echo: “We have sent a report to the Department on the past ten years and everything that Pure has done and the impact it has had.

“We also included a five-year plan for the coming years, which includes a plan for CCTV in the Dublin and Wicklow Mountains.

“If funding is provided for the continuation of Pure, CCTV will be introduced.”

He added: “I think we need to go back to basics, we need something concrete that will make an impact.

“We have run lots of different education projects which are vital, but we need something concrete, especially in areas where there is repeated illegal dumping.

“If we can’t prevent it we need something that can deter people or assist in prosecuting.

“These cameras will be mobile and people won’t know where they are.

“There are a number of sites in South Dublin County that are extremely prone to illegal dumping, with some communities plagued by it.

Pure recently erected signs to help report illegal dumping at a number of locations in Tallaght which, at entry points to the Dublin Mountains, encourage people to call Pure’s LoCall number – with the project mapping the location and collecting the waste.

To report illegal dumping in the Dublin Mountains, and in the foothills at Tallaght, call Pure on 1850 365 121.