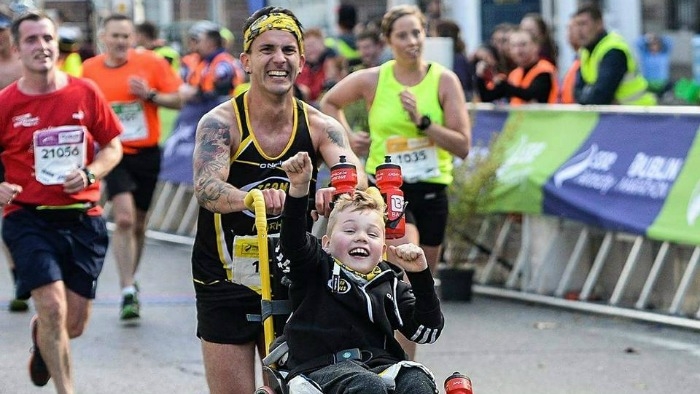 LUCAN’s TEAM James has raised in excess of €45,000 in the aftermath of an incredible performance in last Sunday’s Dublin Marathon. Mark Lacey pushed James Casserly (10) the 26.2 miles in his wheelchair.

But it wasn’t just Mark and James who took to the roads. A total of 30 athletes, including James’s dad, Dan Naughton, and his aunt, Alison Casserly, ran the marathon for Team James.

James’s mother Vicki Casserly told The Echo that James was thrilled after completing the marathon. She said: “He was on cloud nine.

“I think half of Lucan turned out to support them. He was thrilled. He relished every minute of it. There were three athletes in assistance chairs in the race. James got a great sense of pride and achievement from taking part.

The running isn’t over for Mark Lacey who will run the New York Marathon on Sunday with his wife Linda, also in aid of Team James. In training for the marathon, Mark and James trained a whopping 965.60km in total and over 40 hours in the gym.

Mark told The Echo that people might say he is mad to run another marathon just a week after running one, but it will be worth it.

He said: “Well, I put my body through cramp and pain like I never had before last Sunday and was so emotional, and I’m going to do it all again this Sunday, but this pain and emotion will go away for me.

First home for the women was Mayo native Pauline Madden in 3hrs and 33 minutes, more than 20 minutes inside her previous personal best. Next for the ladies were Jacqui Boyle, then ladies’ captain and vice captain Claire O’Brien and Sarah Jane Kinsella, respectively followed by Liz Pepper.

Lucan Harriers were represented by 27 athletes in the race. Eileen O’Brien won the silver medal in her age category in the Irish National Marathon Championships and the club had two top 200 finishers with Will Byrne finishing 136th overall and Derek Taylor in 167th overall.