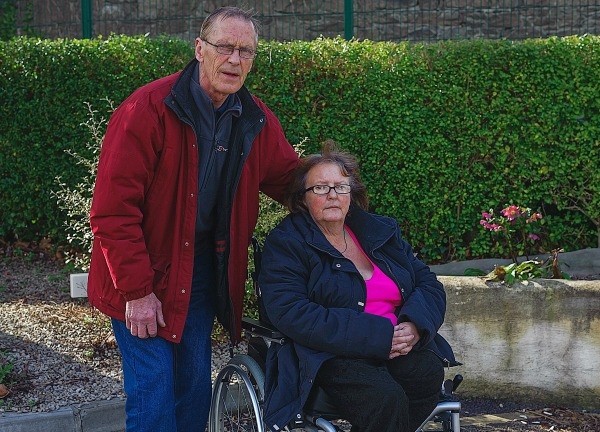 Amputee cannot return home unless house is adapted for wheelchair use

THE PARTNER of a woman whose leg was amputated in January following an illness is highlighting the daily struggles families who are waiting for their homes to be adapted are facing, as she is forced to remain in hospital as they await changes to their home.

Joe McKnight has lived with his partner Mary Maher for 27 years in their home in Whitechurch, which they rent from South Dublin County Council.

Following a two-year illness which prevented circulation to Mary’s leg, she was forced to have it amputated back in January and has been recovering in St Luke’s Hospital in Rathgar.

Throughout Mary’s illness and following her surgery, Joe has been trying to find out a timeline for when works to their three-bedroom home will take place – as Mary is in a wheelchair, she is unable to use the only bathroom in the house which is located upstairs and will need a specially adapted room downstairs.

Speaking to The Echo, Joe said: “It upsets Mary terribly, she wants to come home but she can’t stay permanently as the house is not adapted for her.

“We have a sitting room that we don’t use that can be adapted into a bedroom with a bathroom that Mary can use.

“We’ve been living in this house for 27 years, and we’ve never been in arrears with paying our rent so I just can’t understand why it’s so difficult. Where is the rent money going to if not on the house?

“We’ve had three occupational therapists coming out to the house, but there is nothing being done. I was told it could take up to two years for anything to happen, but I was told I cannot get that in writing.

“Last August I tried to get a rail on the stairs so Mary could use it, but I was told there was no money available for it.
“We understand that there are other people in front of us, but there are people including Mary in hospital who want to come home but can’t because their home isn’t adapted for their needs.

“The money it is costing to keep her in hospital could be used to adapt the house so that she can come home.
“At this point, we would just love for people to be honest with us. If it’s going to be two years, we just want to know that is definite so that we can make plans.

“Mary is in good spirits, but being in hospital is getting her down.The stress is killing me and it’s getting to her too.”

A council spokesperson said: “The council is not in a position to respond in detail on individual cases but will in this case state that a number of viable options have been put to the tenants but to date have been refused.

“The council has a number of cases for adaptation works and systematically works though those, prioritising based on medical information made available to us. In all cases all options are investigated and put to the tenants.”