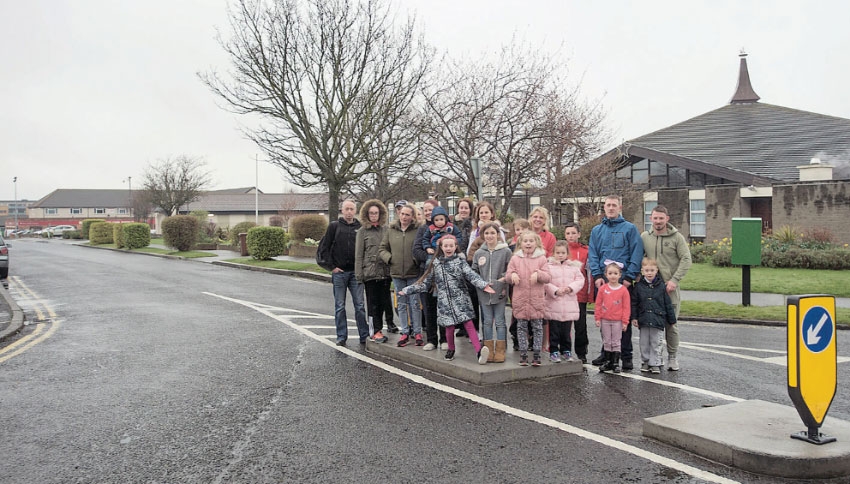 Angry residents call for speed ramps before someone is killed

A MILLBROOK Lawns resident, whose front garden wall has been knocked down by speeding cars on a number of occasions, is calling on South Dublin County Council to build new speed ramps in the area.

Suzanne Kenny, who lives in the Crescent in Millbrook Lawns, has suggested new locations for two speed ramps, after the council’s plans for the construction of three speed ramps were objected to, leading to them being scrapped.

The new locations that Ms Kenny has suggested are on the roadway between St Dominic’s Church and Mountain Park Dental Surgery, and to the side of the church opposite a patch of greenspace in the Crescent, so that the speed ramps will not be located in front of anyone’s house.

Ms Kenny has been trying to get the council to build additional speed ramps in the area since 2016, and while ramp markings and plans for the placement of speed limit signs were recently undertaken by the council, the plans had to be stopped as a result of the objections the council received.

Ms Kenny told The Echo: “We’ve had to rebuild our wall because of people crashing through it.

“There are speed bumps on the road but there’s a big distance between them.

“Are the council going to wait until someone gets killed?”

Ms Kenny added that she understood why one of the residents of the Crescent had objected to the plans for a speed ramp in front of her house, however she is questioning why the council didn’t instead try to find alternative locations.

“They could put it outside the field [in the Crescent], where it’s not outside anyone’s house.

“If they put a ramp in it would slow people down as they come around that corner – it would make a huge difference.

“I’m doing all I can, because if and when someone gets killed on that corner then I will be able to say that I did everything that I could [to prevent it].”

A spokesperson from SDCC said: “There was one objection.

“There were no submissions in favour of ramps at this location.

“Residents were specifically asked to submit their support for or objection to the provision of ramps.

“SDCC Engineers carried out a detailed assessment of each cell in order to determine the optimum location(s) for ramps.

“In all cases where residents feel that ramps are still required they should make a further submission to SDCC Traffic Section requesting these and the location will be further assessed in due course.”