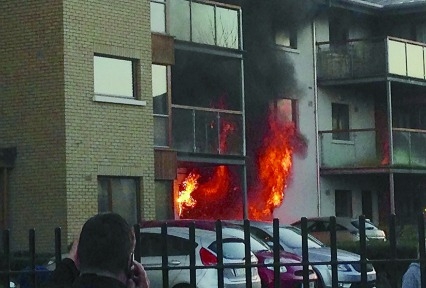 Apartment gutted after bin set on fire by ‘rogue firework’

A ROGUE firework or banger is believed to have been the spark that caused a serious blaze in Tallaght on Halloween, a fire which put the lives of local families at risk and resulted in one apartment being gutted and others destroyed by smoke damage.

Black smoke filled the sky above Hunters Wood at around 4.30pm on Saturday (October 31) when a blaze ripped through a ground-floor apartment – with the intensity of the fire also damaging a number of nearby apartments in the short space of time it took emergency crews to arrive.

Nobody was injured in the blaze which, attended by five fire engines, is believed to have started when a bin was set alight in an underground storage area – which lay in an archway directly under the gutted apartment.

The Echo understands that the heat from the blaze in the bin storage area radiated up into the apartment, resulting in a fire which put a number of homes and families at risk.

According to Garda reports, investigations are following a line of inquiry that a firework, banger or match was thrown into the bin, an act which endangered the lives of those living above.

Aileen Stack, a spokesperson for the Ballycullen Alliance, a combined group that is made up of several residents’ associations, told The Echo: “The day before the fire we told South Dublin County Council and local Gardaí that young people were stockpiling timber and wood for bonfires in the underground carpark under Hunters Wood.

“We have heard that a firework may have set a bin on fire, but if any of this wood was still there, it could have provided fuel to the fire.

“Like all estates we have our share of anti-social behaviour from time to time and there have been issues with this underground car park before.

“Access to the car park needs to looked at and addressed to make sure something like this doesn’t happen again.”

She added: “This fire put the whole estate of Hunters Wood at risk and it’s terrible that these apartments were destroyed.

“We are calling on the council, the gardaí and the management agency for Hunters Wood to view all CCTV from the area and to take immediate actions and sanctions with those involved.”

A Garda source told The Echo: “From our initial investigations it looks like someone set fire to a wheelie bin, which then ignited the apartment.

“The evening that was in it, it could have been a firework or a banger, but that’s inconclusive at the moment.
“We have had the scene forensically examined and are continuing with our investigations.

“We would encouraged anybody with information or who witnessed anything suspicious to contact Tallaght Garda station.”