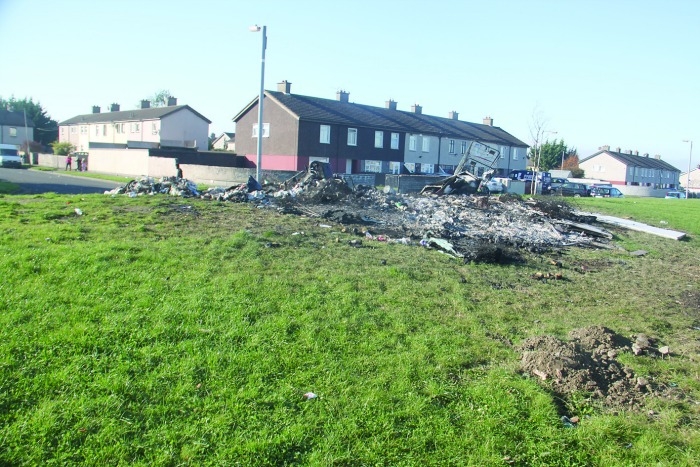 AS HALLOWEEN approaches, an appeal has been made for young people not to compromise the safety of fire crews, or impede their route, as they respond to 999 calls in communities.

Crews from Tallaght Fire Station have recently been out and about in communities responding to fires and other Halloween-related incidents, while continuing to attend to domestic and commercial fires and people in need of emergency medical attention.

As bonfire season sparks off, a Tallaght firefighter has this week appealed to the community to assist crews as they respond to calls in the run-up to, and including, Halloween night.

The firefighter said: “Halloween is a more treacherous time of year, with the nature of the calls and the proximity of the calls to domestic dwellings making things more difficult.

“If we are responding to an incident of critical nature and somebody throws a missile at us it compromises our safety and impacts on us doing our duties.

“Getting missiles thrown at us is not a regular occurrence, they are far and few between and I think a school’s awareness programme has helped with that.

“However, this activity can increase around Halloween and we would ask gangs of youths not to impede our route or compromise the safety of the crew.”

One such incident took place last night when a Tallaght fire crew had their fire truck attacked, with youths smashing a window of the engine, putting the unit out of service for more than three hours.

Unfortunately one of our Tallaght appliances was unable to respond to emergencies last night for almost 3 hours after stones were thrown 1/2 pic.twitter.com/9KYsOjoaZr

at it smashing a window. Luckily no crew members were injured. We remind everybody that we are here to help the whole community. pic.twitter.com/SfDjQ04UTB

The firefighter added: “We would also remind people that fireworks are illegal for a reason.

“They are so dangerous and children should be reminded never to pick up anything that’s burning on the ground.”

The council told The Echo: “As in previous years the council continues to promote and encourage a ‘Safe Halloween’ with the objective of reducing injuries, environmental damage and an approximate clean-up cost of €50,000 associated with this time of year.

“A substantial effort is being made by the council to deter the activity of illegal bonfires through a range of measures, including reducing the availability of material for bonfires by removing bonfire material from circulation during normal daylight working hours and within health and safety limits, enforcement of litter legislation by enforcement officers, and the bonfire prevention campaign.”

Clondalkin Sinn Féin councillor Mark Ward also had an emergency motion passed in council chambers this week, which called on the council to direct extra resources into Halloween weekend.

Gardaí at Tallaght, who will support the council in the removal of bonfire material, have also urged parents and children to stay away from fireworks and bangers in the interest of their own safety and that of others.

Members of the community are encouraged to visit www.sdcc.ie to read the council’s infographic leaflet on how to stay safe at Halloween.

Report bonfire materials to the council by calling 4149000.