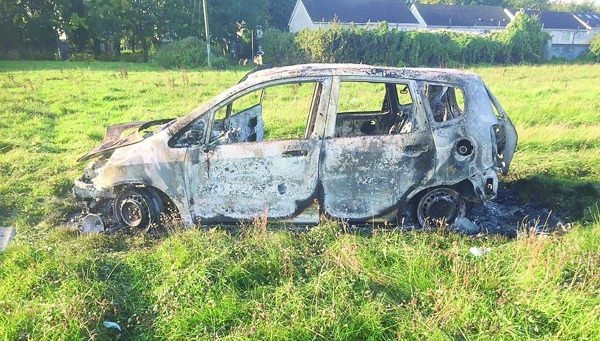 Numbers of cars burnt out set to double this year

THE number of robbed/burnt out cars removed in Dublin South Central is set to double in 2016.

In 2015, Dublin City Council removed 15 cars – 10 in Ballyfermot-Drimnagh and five in Crumlin-Kimmage.

However, in the first six months of 2016, the city council have already removed 27 cars in the constituency – with 17 removed in Crumlin-Kimmage and 10 in Ballyfermot-Drimnagh.

This week at the Dublin South Central area meeting, Sinn Féin Councillor Daithí Doolan, asked how many cars were removed over the last three years.

“This is shocking. There seems to be an epidemic of robbed cars. It effects the individual whose car is robbed, but it also has a terrifying effect when the cars are driven at high speed through streets and then burnt out in parks or on our roads.”

The Echo has reported numerous cases of burnt-out cars in recent months, particularly in Cherry Orchard, with the city council removing 10 burnt-out cars in the area during a one month period from August to September alone.

Earlier, cars were burnt out in Brickfield Park, Stanaway Park and Clonmacnoise roundabout in Crumlin, with Brickfield Park suffering damage to its pitches.

DCC say all burnt-out cars are removed free of charge by their contractor, who gets a free scrappage fee as their payment.