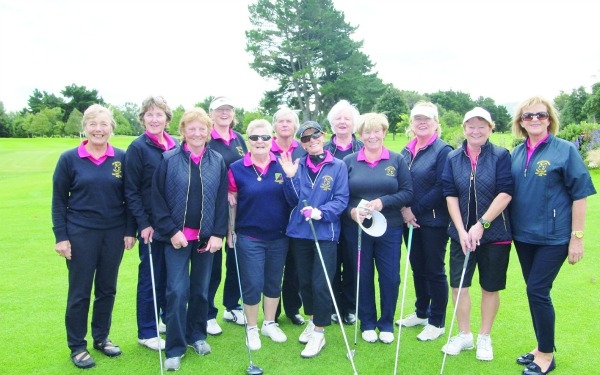 With their team leading 2-1 after the first leg at home, Ballinascorney manager Marie T Kelly and her assistant Patricia Guard were quietly confident heading into the second leg from which they required 1.5 for overall victory.

First up for Ballina-scorney was Ita Redmond and Doreen Martin against Eleanor Fitzgerald and Caitríona Mooney.

Although four down through nine, they fought back brilliantly in difficult weather conditions to stand on the 18th tee box all square.

Martin made a 15-foot right to left downhill putt which ensured a valuable half point for the team.

The next match up saw Caitríona Plunkett and Eileen Ryan up against Anna Melotte and Fiona Shackleton, with Castle gaining a valuable point after a hard-fought match.

More than 200 supporters from both sides gathered to watch the last match between Liz Walsh and Therese McDonnell against Lisa McDonnell and Lorraine Cunningham, with victory secured for Ballinascorney on the 17th green where Walsh sunk the final putt of the match.

Delighted with her side’s efforts, Lady Captain Bernadette McGovern said: “I’m so proud of the team’s achievement overcoming tremendous challenges in every game.”

The victory marked the final step in a great campaign for Ballina-scorney that saw them undo Slade Valley, Kilma-shogue and Dun Laoghaire in the previous rounds.